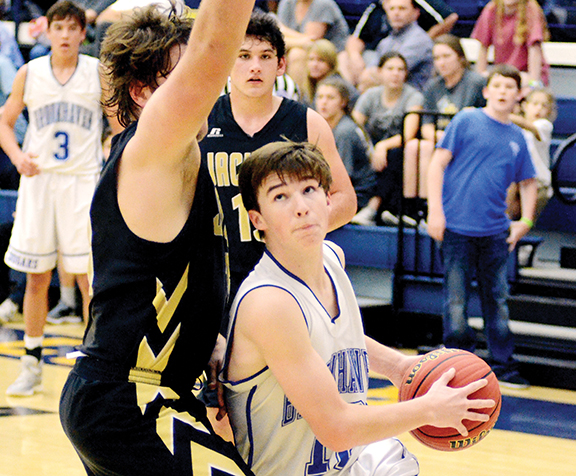 Dawson Flowers of Brookhaven Academy drives to the hole against the Oak Forest defender in their 44-36 win Tuesday afternoon. (Photo by Dylan Rubino)

CLINTON — After falling in the AAA state championship game Saturday night, the Brookhaven Academy Cougars had to turn it around quickly as they faced Oak Forest Academy in the opening round of the MAIS overall tournament in Clinton Tuesday.

The Cougars overcame a sluggish second and third quarters and rallied in the fourth to take down Oak Forest and advanced to the next round. They’ll face the Greenville Christian School today at 11 a.m.

“We made some adjustments at halftime after a slow start and the guys were gritty enough and tough enough to come back in the end,” Brookhaven Academy head coach Josh Watts said. “The last minute and a half our guys really stepped up and made big plays.”

The Cougars came out aggressive on defense in the first quarter, holding Oak Forest to only five points and took a 14-5 lead after the first.

Momentum changed in the second quarter as Oak Forest flipped the script with tough defense forcing turnovers and taking control of the game. The Cougars could not find their rhythm on offense as Oak Forest tied the game at 20 going into halftime.

“We played really well early. They were backed up in a zone and we hit some big shots,” Watts said. “We didn’t handle the ball well enough and they started to put pressure on us that really bothered us.”

Watts knew the key to winning the game was slowing down sophomore point guard Lavell Scott for Oak Forest. Scott would finish the game with 18 points to lead the Yellow Jackets.

Senior Luke Jackson guarded Scott for most of the game, but sophomore Cade Brown guarded Scott in the fourth quarter and gave him problems late in the game when it mattered most.

“Cade, with his length, gave him some trouble,” Watts said. “He missed just enough shots for us to get key rebounds and I think that was a really big deal. It was a team effort to slow that kid down.”

Trailing by three to start the fourth quarter, Brookhaven Academy used their tough defense to convert turnovers into transition points as they outscored Oak Forest 17-6 in the quarter to win 44-36.

It was a balanced scoring effort for the Cougars as all six players who played scored. Ethan Nations led the Cougars in scoring with 11 points, followed by Dawson Flowers with 10 points. Cade Brown scored six of his eight points in the fourth quarter, adding on to his stellar defensive performance.

It’s hard to come back from a disappointing loss like BA suffered Saturday night, but the Cougars showed new life Tuesday and look to make a run in the MAIS overall tournament.

ELLISVILLE – The Lady Wolves survived the opening round of the MACJC State Tournament after a thrilling game with East... read more