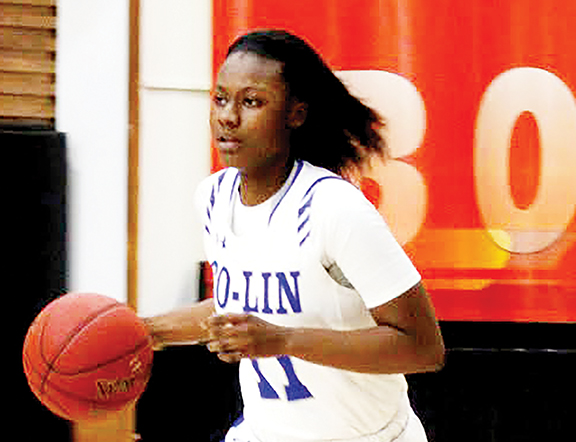 Freshman Brittany Rose of Co-Lin (11) led the Lady Wolves in scoring with 18 points and shot 5-for-7 from three-point range in their win Monday night over EMCC. (Photo by Lucas Calvert)

ELLISVILLE – The Lady Wolves survived the opening round of the MACJC State Tournament after a thrilling game with East Mississippi Community College. The 60-59 victory advances the Lady Wolves to the semifinals versus Southwest Community College on Wednesday at 1 p.m. in Ellisville on the campus of Jones County Junior College.

The opening five minutes of the first quarter were Co-Lin’s slowest of the season as the Lady Wolves failed to find a basket until the 5:04 mark. The Lady Wolves simply could not find the bottom of the net on the offensive end of the floor.

The Lady Wolves battled back in the final minutes of the first quarter and cut the lead to just three. East Mississippi took a 12-9 lead into the second quarter.

Co-Lin took their first lead with 6:50 remaining in the second quarter after a layup by Karry Callahan gave the Lady Wolves a 16-14 advantage. The lead was short lived as the Lady Lions regained control and took a 26-20 lead into the locker room. The Lady Wolves shot just 25 percent (7-for-28) in the first half.

The threes were falling for the Lady Wolves in the second half as Co-Lin took a 37-34 lead with 5:15 remaining in the quarter. The offense showed much more composure in the third, which resulted in, better looks from the floor. The Lady Wolves led 42-39 going into the final quarter of action.

Early in the fourth quarter, action was back-and-forth as Co-Lin led 51-49 with 6:46 remaining. The Lady Wolves were never able to pull away and eventually lost the lead with just 1:15 remaining. Tenazhia Hinkson drove to the basket for the Lady Wolves and drew a foul and went to foul line with less than 10 seconds in the contest. Hinkson rattled home both shots and gave the Lady Wolves a 60-59 lead.

Tyeisha Juhan led the Lady Lions with 23 points, while Quantesha Patterson added 13 points and 11 rebounds. Anissia May finished with 11 points.