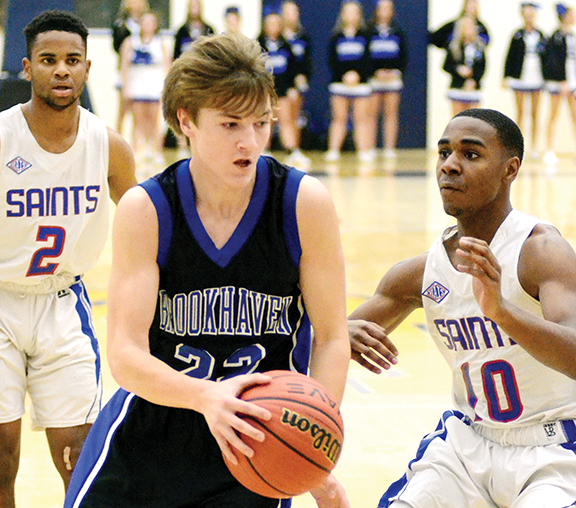 Tate Felder of Brookhaven Academy (22) dribbles past the Greenville Christian School defenders in their 40-34 loss in the second round of the MAIS overall tournament Wednesday afternoon. (Photo by Dylan Rubino)

CLINTON — Trailing 36-34 with under a minute left in the game, the Brookhaven Academy Cougars needed one more defensive stop to potentially get the ball back and tie the game.

Cougars’ head coach Josh Watts called for his team to intentionally foul to put the Greenville Christian School Saints at the free throw line with 31 seconds left. Junior guard Luke Jackson ran into the Saints ball-handler and knocked him to the ground by accident. The refs called a flagrant foul and the Saints knocked the free throws down to seal the game.

Greenville Christian ended up winning the game 40-34 and ended the 2016-17 season for Brookhaven Academy.

“We were trying to foul there at the end down two and we made a mistake,” Watts said of the play. “We didn’t mean to do it. That’s just kind of the way things happened in the game and that ended up costing us.”

The Cougars found themselves in a hole early as Greenville Christian opened up the game on a 6-0 run. Junior guard Ethan Nations scored seven of his 14 points in the first quarter to bring BA back, but trailed 14-11 at the end of the first quarter.

The Cougars slowed the game down by setting up their offense and settling for the right shots to keep Greenville off their up-tempo offense they like to run. BA won the second quarter, but trailed 25-23 going into halftime.

Greenville Christian is a team with size and speed and those advantages proved to be the difference maker in the final quarter of play. The Saints held Brookhaven Academy to only two points in the quarter, as the Cougars couldn’t build off their third quarter lead and the season ended by a score of 40-34.

“We got some shots there at the end and we just didn’t finish,” Watts said. “That was the big thing.”

Nations led the Cougars in scoring with 14 points. Sophomore forward Cade Brown was the next leading scorer with eight points and senior Dylan Winborne followed up with six points on the afternoon.

For seniors Winborne and Colton Watson, it’s the last game of their Brookhaven Academy careers. The rest of the team returns for the 2017-18 as the Cougars are poised to make another run.

Coach Watts has made his point all season long that his team is very young. Those young players now have a full season of experience under their belts and the sky is the limit when next season rolls around.

“I don’t think anybody thought we would get to this point.” Watts said about his team. “I’m extremely proud of them for getting to this point. We made a lot of progress from the beginning of the year to now. Our future looks pretty good. We just have to keep on working to get better every chance we get.”