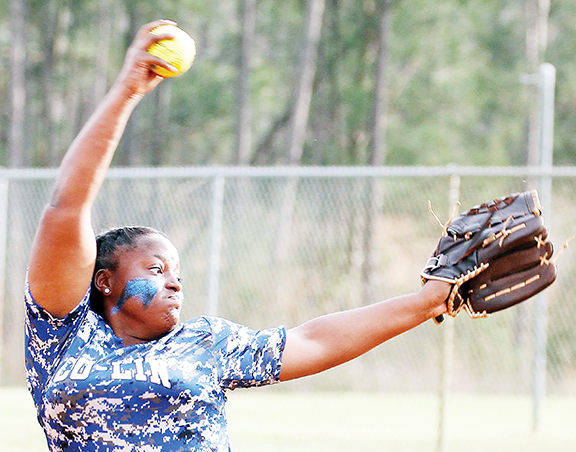 Christian Black, a freshman and Bogue Chitto graduate, tossed all nine innings for the Lady Wolves in game two giving up one earned run on five hits, striking out five, and walking two in a game earlier this season.(Photo by Lucas Calvert)

The Lady Trojans took the lead in the top of the first inning on a 2-out RBI single by Brittany McTeer. The Lady Wolves tied the game in the bottom of the inning as Kamryn Vanlandingham scored on a single Dianna Hobgood.

Co-Lin increased their lead to 4-1 in the bottom of the third. Alexsundria Thomas led off the inning with a single to center. Jamie Martin followed with a single. Allison Livingston reached on a bunt single to load the bases. Mackenzie Byrd’s sacrifice fly to center field plated Thomas.

In the bottom of the fifth, Co-Lin increased their lead to 6-1. With two outs, Byrd tripled to center and scored on Anthony’s RBI single. Anthony stole second base and scored on Vanlandingham’s double to center.

The Lady Trojans added a run in the top of the sixth aided by an error.

Leading Co-Lin’s 11 hit attack were Hobgood (one RBI) and Vanlandingham (two RBIs) with a double and a single apiece. Also hitting safely were Kayla Britt, Thomas, Martin, Livingston, Byrd (one RBI), Anthony (one RBI) and Root (one RBI).

Kaylin Lloyd led Mississippi Delta with a double and a single (one RBI). Adding support with a single apiece were Allyson Barber, Karlye Burden, Talaja Echoles and McTeer (one RBI).

With the scored tied at 2-all in the bottom of the ninth, the Lady Wolves loaded the bases and scored the winning run as Byrd was hit by a pitch.

After three scoreless innings, Co-Lin scored first as Byrd led off the inning with a bunt single. Anthony reached on an error. Christian Black reached on a bunt single to load the bases. Vanlandingham singled on a line drive to center field scoring Byrd and giving the Lady Wolves a 1-0 lead.

Mississippi Delta tied the game at 1-all in the top of the sixth on a home run by Rebekah Garner.

The Lady Trojans took a 2-1 lead in the top of the ninth. Briana Knox scored on a ground out by Quaneisha Pratt.

In the bottom half of the inning and Britt at second base, Hobgood’s sacrifice bunt advanced Britt to third. Thomas was hit by a pitch. Martin reach on catcher’s interference to load the bases. Taylor Bryant’s line drive single to left field scored Britt. With the bases still loaded, Bryd was hit by a pitch scoring Thomas and giving the Lady Wolves a dramatic 3-2 win.

Black earned the win for the Lady Wolves tossing all 9 innings. She gave up one earned run on five hits, striking out five, and walking two. Mollie Simpson absorbed the loss allowing no earned runs on 9 his, striking out 1 and walking 7 in eight and a third innings of work.

For Mississippi Delta, Garner had a home run and a single. Lloyd had a pair of singles. Pratt had an RBI.

The Wesson Lady Cobras traveled to face the Bogue Chitto Lady Bobcats Tuesday and Wesson controlled the scoreboard and the... read more