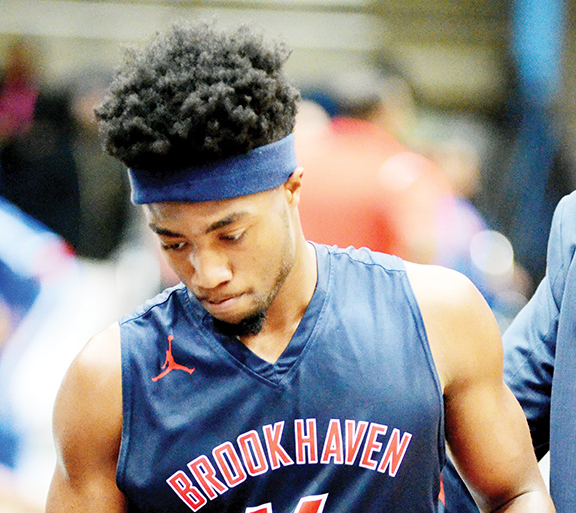 Senior guard Damarius Brooks of Brookhaven (14) walks off the court for the last time of his BHS career in their 60-52 loss to Clarksdale Friday morning in the 5A state quarterfinals. (Photo by Dylan Rubino)

Ole Brook 5A title run comes to an end

JACKSON — The Brookhaven Panthers hadn’t tasted defeat since the end of January in a home loss to district opponent Provine.

The Panthers had won seven in a row, averaging 72 points per game, heading into their 5A quarterfinal matchup against Clarksdale Friday morning at Jackson State University.

The Panther offense could not get it going Friday as their hot streak and postseason run came to an end by a score of 60-52. The loss ends the Panthers’ season with a 21-6 overall record.

“We missed way too many shots that we normally make,” Brookhaven head coach Jimmie Butler said. “They played hard. We just weren’t able to get the ball in the basket.”

Five seniors played their last game for Ole Brook Friday morning, ending great careers and memories for each of the players.

Senior guard Damarius Brooks carried Brookhaven all season long, but he struggled to find his shot against Clarksdale. Brooks finished the game with 14 points on 6-of-20 shooting from the field with seven rebounds and two steals.

With Brooks struggling, it would be up to Denarius Gray to carry the load on offense. The senior point guard led the team with 24 points on 8-of-19 shooting from the field to keep the Panthers afloat.

Dykelius Grandberry led Clarksdale in scoring with 22 points on 7-of-16 shooting from the field with eight rebounds.

The first half was an offensive struggle for both teams as Brookhaven shot 25 percent and Clarksdale shot 29 percent, resulting in the game tied at 18 going into halftime. Both teams missed open looks throughout the first half and both teams had plenty of opportunities to blow the game open, but failed to do so.

The Wildcats shot 0-for-8 in the first half from deep, but poured it on from deep in the second half. Clarksdale shot 5-for-9 from three-point land in the second half and 41 percent from the field to extend their lead and pull away in the fourth quarter.

“I thought we executed our offense. The score doesn’t reflect that because we missed so many open shots,” Butler said. “We shot the ball well in pre-game. Just couldn’t find our rhythm.”

The effort was there all game long for the Panthers, but the outcome simply hinged on making timely shots. In a game that featured six lead changes and the scored tied on three different occasions, the ball had to roll a certain way.

For the first time in a while, the ball didn’t bounce the Panthers’ way and a successful season came to a disappointing end.

Brooks, Gray, Jashawn Perkins, Jaquorius Davis and Alondo Floyd all played their last game for Brookhaven and will be moving on.

“I know this entire town is proud of this team. After tryouts, it appeared that we would be a rebuilding team,” Butler said. “They committed themselves to the weight room and challenged each other daily. They believed in each other and our system. 21-6 and district champs is a result of that.”

ELLISVILLE — The Copiah-Lincoln Lady Wolves fell to Southwest 53-50 Wednesday afternoon in the semifinals of the MACJC State Tournament.... read more