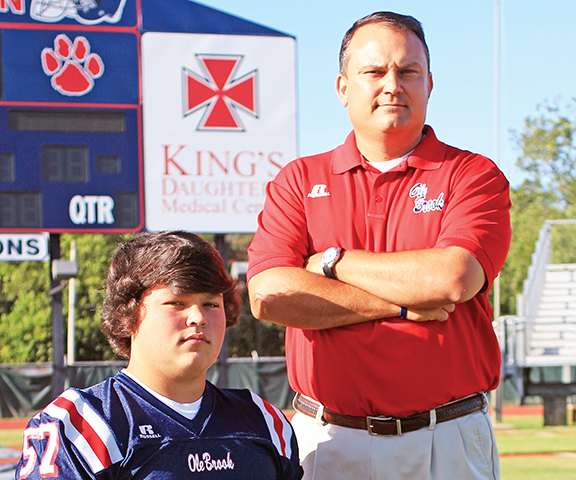 Trace Clopton of Brookhaven (left) received his first Division 1 scholarship offer from South Alabama Friday night. His father Tommy Clopton (right) could not be more proud as a father and football coach.

It was a very successful season for the 6-foot-2, 292-pound Clopton, who anchored the offensive line for the Panthers, helping lead his team to the 5A state playoffs.

This seems to be the first of many more offers to come for Clopton as the junior looks to build off his successful 2016 campaign going into his senior year.

His successful 2016 season helped put Clopton on the Class 5A all-state first team and provided Brookhaven with stability on a strong offensive line unit.

“Trace has worked extremely hard just to put himself in position to get a scholarship offer,” Brookhaven head coach and father of Trace, Tommy Clopton said. “Over the next few months, I think you will see a few more of our players get scholarship offers.”

It’s a difficult challenge to balance the time between father and coach when coaching your own son, but watching his son become a better football player and person every day is really what matters.

The baseball season is just two weeks old, but the seven teams in Lincoln County have already impressed in the... read more