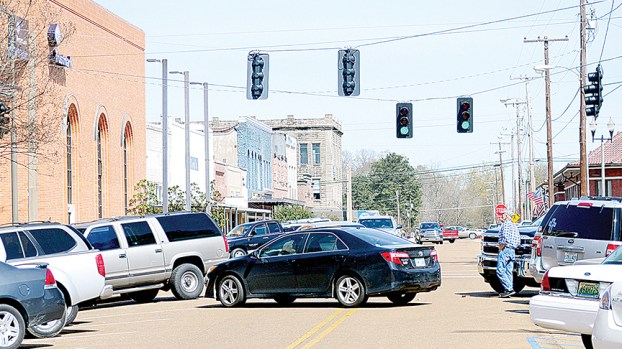 As city crews begin replacing manholes — the first step toward switching Railroad and Whitworth avenues to one-way thoroughfares — a jewelry store owner in Meridian warns Brookhaven businesses that it may not be the best thing for their customers.

“Some of the problems I’ve seen here are with customers trying to get around, but they can’t turn left, or can’t turn the way they want,” said Steven LaBiche,  owner of LaBiche Jewelers on 8th Street in Meridian.

When street flow directions are changed, “People who work and know downtown will figure it out and adjust. But others … won’t adjust as quickly and may go elsewhere,” said LaBiche, who is president of the recently reformed Downtown Association. He said the association was reformed in order to give business and property owners a chance to get their voice back in what happens downtown.

At Bland’s request, Meridian is conducting a study into the issue of traffic flow and parking downtown, but LaBiche said the association has not heard any likely conclusions or seen any data from that study as yet.

“Businesses are there for customers primarily. Everything else may be important, but it’s secondary,” he said.

In Meridian, customers and tourists can go any number of places outside of downtown to shop, so maximized use of streets is needed in order to benefit downtown business and property owners, as well as the customers who want to do business there.

“What’s the solution for it?” asked LaBiche. “My goal is to make it more convenient for customers. That’s it.”

Meridian’s traffic plan doesn’t work in some areas, at some intersections, LaBiche said, and changing those intersections won’t necessarily help. “Every time you change something, you’re going to have a different problem. The trick is to foresee that problem and decide which problem you want,” he said.

“The previous study done in Meridian was by [then-Mayor] Jimmy Kemp in the mid- to late-‘80s, or early ’90s. Before then, … pretty much every time [we had a new mayor], they’d change directions of the streets.”

Kemp’s goal “was the flow of traffic through town. The problem is, we want traffic to stop downtown.”

LaBiche, who’s visited Brookhaven a few times through the years, said merchants should have a say in the traffic plan. Whatever Brookhaven does with this street project, “Involve your businesses for their input,” he said.

The future look of downtown Brookhaven was created by Dungan Engineering.

Whitworth and Railroad Avenue will be repaved into one-way streets. Whitworth’s traffic will go south, while Railroad’s traffic flows north. Traffic lights will be removed from both roads. They’ll be replaced by 4-way stop signs.

All parallel parking will also be changed to slanted parking. This will create more space and an additional 36 parking spaces for the entire area.

Part of the plan also includes repaving for Cherokee Street and Brookway Boulevard. Sawmill Street, Williams Street and Martin Luther King Drive will also be restriped, though none of those will have the traffic flow changed.

“We have about nine manholes in the downtown area, which is going to be a part of the one-way street project,” Public Works Director Keith Lewis said. “We’ve decided to change every one of those out because they’re brick man holes which have a tendency to collapse once they get old.”

Ward 4 Alderwoman Shirley Estes, who is serving her last few months in office before retiring, said she’s all for the change to one-way streets. “People think it’s not going to help but there’s proof in the pudding,” she said. “It’s going to provide more parking places and space for people.”

Mayor Joe Cox said one-way streets downtown will take some getting used to. “Obviously, it will be a learning curve, adjusting to one-way traffic, but I look forward to the benefits of additional parking and solving the safety issue on the south block of Whitworth Avenue,” he said.

Chamber of Commerce Director Garrick Combs said downtown business owners for the most part are supportive of the plan. He said they met several times to discuss the change. “Everyone with the exception of two or three people were in favor of this,” he said.

Sallie Williford, the innkeeper at Inn on Whitworth, is concerned about accidents caused in part by the two-way traffic on Whitworth Avenue.

“I have seen at least one car accident and heard of others,” she said. “We have windows across the front of our inn and we can see the whole block. It’s alarming how many accidents almost happen because there’s not a lot of room and you can’t see very well, especially with the long vehicles so they can’t help but stick out on the lane. People do a lot of precarious driving.”

Businesses across the railroad, like Georgia Blue, are also in favor of the new project.

Additional parking spaces will only bring more customers for Georgia Blue, he said. He hopes the same will be said for their bakery that’s opening directly across the railroad tracks on Whitworth.

“I love the route Brookhaven is going as far as development, and I’ve seen nothing but great things going on in downtown Brookhaven,” Grafton said. “I’m excited about the future of Brookhaven… activity brings in activity.”

Sen. Sally Doty, R-Brookhaven, is hopeful a bill that would allow non-profit hospitals to recover bad debt from any state... read more