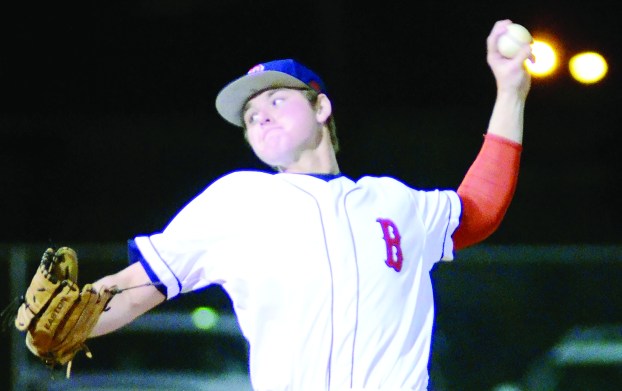 Penn Wilson of Brookhaven threw five shutout innings , only giving up one hit with 12 strikeouts in their win over Bogue Chitto Wednesday night. (Photo by Dylan Rubino)

The Panthers picked up their first win of the season Wednesday night by shutting out Bogue Chitto 11-0.

Errors in the third inning doomed the Bobcats and the Panthers took advantage in a dominant third inning and crushed Bogue Chitto 11-0.

Despite the Panthers getting the first runner on base in the bottom of the first, they weren’t able to bring the runner home to take an early lead in the first inning.

Senior Penn Wilson led off the bottom of the second with a single to deep left field. Facing two outs, sophomore Corbin Falvey hit a double into right field, putting runners on second and third. Freshman Byrion Robertson brought in the first run of the night for the Panthers with an RBI single to right field. The Panthers would score again on a wild pitch and took a 2-0 lead after the second inning.

Brookhaven scored their third run of the night on another wild pitch from Bogue Chitto that scored Jacob Porter from third to make it 3-0 Brookhaven. Things would only get worse for the Bobcats, as the Panthers took advantage of every error, scoring nine runs in the bottom of the third before the Bobcats could stop the bleeding.

The Bobcats got their first base-runner of the game in the top of the fourth, but the Panther defense turned the double play to end the scoring threat. Brookhaven coasted and won the game 11-0 in five innings.

Wilson picked up the win for the Panthers, throwing five shutout innings, only giving up one hit with 12 strikeouts to go along. Junior Tucker Lambert took the loss on the mound for Bogue Chitto.

Robinson led the way for the Panthers on the night, going 2-for-3 at the plate and led the team with three RBIs on the night and senior Tate Walley and sophomore Corbin Falvey each had two hits and one RBI for the game.

“It was a great team win and it was great to get the win to get us started” Brookhaven head coach Matt White said.

Bogue Chitto will be in action today as they travel to Natchez. First pitch is set for 7 p.m. Brookhaven will host Lawrence County on Saturday with an 11 a.m. start time.

SUMMIT — The Copiah-Lincoln Community College Wolves fell to Southwest 7-3 in the first game of the Coca-Cola Challenge Wednesday... read more