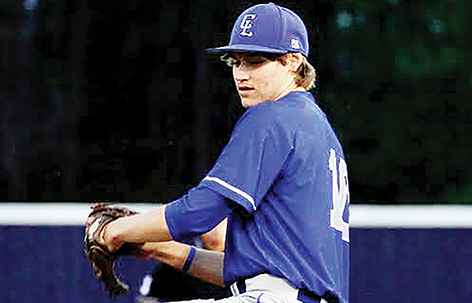 Hunter Fortenberry, a freshman from Pearl, got the start for the Wolves in game one of the Coca-Cola Challenge. (Photo by Lucas Calvert)

SUMMIT — The Copiah-Lincoln Community College Wolves fell to Southwest 7-3 in the first game of the Coca-Cola Challenge Wednesday night in Summit. The loss moves the Wolves to 3-8 on the season, but did not count as an MACJC game. The remaining two games of the Challenge will take place at Co-Lin on Tuesday, March 28. The double header is set to start at 3 p.m. The Wolves are back on Sullivan Field in Wesson on Saturday at 1 p.m. as Co-Lin hosts Highland Community College.

The Wolves picked up one run in the top of the first inning after Jaylyn Williams drove in Conner Wilkinson with a hard hit infield single. The Bears quickly responded in the bottom of the first with a sacrifice fly to tie the game at one apiece.

Southwest had a big inning in the bottom of the second after plating five runs. The runs were the result of a string of singles and an error. Southwest took 6-1 lead into the top of the third.

Matthew Mordecai scored Williams in the top of third with a sacrifice fly to right field to cut the lead to just four.

In the bottom of the fourth, the Bears extended the lead to 7-2 after a line drive to right field.

The Wolves’ final run of the contest was the result of a fielder’s choice in the sixth. Austin O’Flynn drove the ball to the third baseman and scored Kody Smith. Smith reached base earlier in the inning with a single.

The final three innings went by quickly as neither team was able to score.

Chandler Dillard and Williams led the Wolves at the plate with two hits each, while Wilkinson, and Smith finished with one apiece. O’Flynn, Mordecai, and Williams all had one RBI.

The fast pitch softball season is in full gear as the schools in Lincoln and Copiah counties look to make... read more