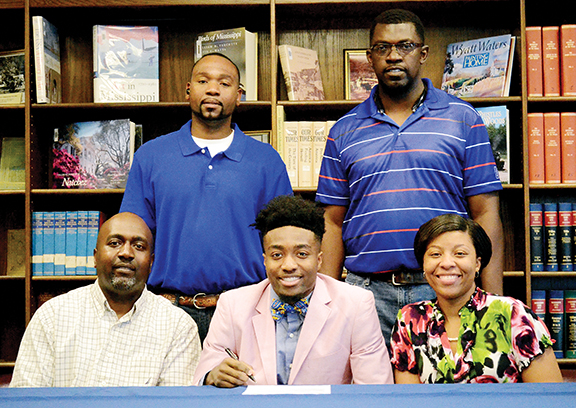 Brooks signed his letter of intent to play basketball at Copiah-Lincoln Community College.

“I really can’t describe the felling. It’s so surreal,” Brooks said. “I’m so grateful and thankful for the opportunity.”

Brooks helped catapult the Panthers to a 21-6 overall record on the season, capped off with a 6-2 record in district play and a district championship over rival Provine.

Brooks and the Panthers had high expectations going into the 5A state tournament, but the run fell short with a 60-52 loss to Clarksdale in the quarterfinals. Brooks described the loss as just an off night, but his senior season is still something he’ll cherish for a long time.

“We didn’t come prepared like we were supposed to and our shots just weren’t falling,” Brooks said. “A bunch of guys just couldn’t find their shot and it was tough.”

The shots were falling the majority of Brooks’ senior season, as he led the team by averaging 21 points per game. Brooks averaged five rebounds and four assists per game as well.

Brooks has been playing competitive basketball for most of his life and spent his playing career with some of his teammates.

Seniors Denarius Gray, Jashawn Perkins and Jaquorius Davis watched as their friend and teammate put the pen to paper to continue his basketball career.

Brooks played basketball with those other seniors since the seventh grade and the connection between the four seniors helped get him to this moment.

“It was fun playing those guys. We built that chemistry since we were young,” Brooks said. “We’ve been building on it since the seventh grade. We knew what we had to do and how to lead the team. We got together and knew we had to lead.”

The talent and leadership between the group of seniors led them to new height during the 2016-17 basketball season. Those seniors will move on to bigger things in their futures, but they’ll surely be missed.

Brooks will join Darrian Wilson and Lazorian McNulty on the hardwood at Co-Lin for the 2017-18 season for one more go-around on the hardwood as teammates. It was an opportunity Brooks couldn’t pass up.

The hard work and dedication culminated into one moment for Brooks, where he’ll continue his basketball career for two more years, but that’s not the end goal for Brooks.

“I plan on going to a higher level playing basketball for college,” Brooks said. “After that, hopefully the NBA.”