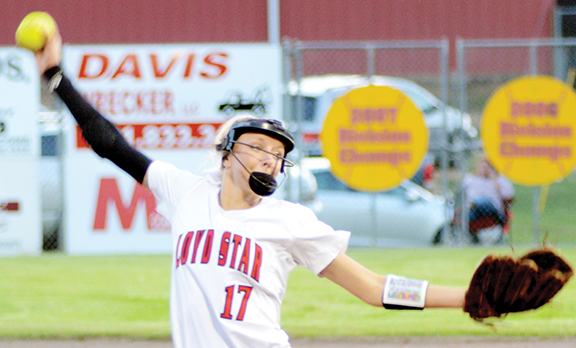 The top two softball teams in the area faced off Friday night at Wesson High School as the Loyd Star Lady Hornets and the Wesson Lady Cobras were looking to make a big statement in the young season.

Loyd Star came into the showdown at a perfect 4-0 and Wesson came in not far behind at 4-1. The winner of the game would solidify their place as the top team in the area.

The game would go to extras as the Lady Hornets won a nail-biter in eight innings over Wesson 3-2 to move to 5-0 on the season. The loss dropped Wesson to 4-2.

Loyd Star was able to stay in the game thanks to the pitching performance of senior Makenzie Smith. The senior leader was great on the mound once again, pitching all eight innings, giving up no earned runs on three hits, two walks and struck out nine batter on the night. The win moves Smith to 5-0 as a starter for Loyd Star and has shown no signs of slowing down.

Friday night featured great pitching from both teams, meaning offense would come sparingly throughout the game.

No runs were scored in the seventh, so the game would go to extras. Costly errors by Wesson put runners on base for Loyd Star and brought two runners home as Loyd Star took a 3-1 lead and seemingly put the game out of reach.

However, the Wesson Lady Cobras wouldn’t go down without a fight. They tacked on one in the bottom of the eighth to trail by 3-2, but couldn’t get another run home and gave Loyd Star the victory.

Arie Douglas and Shelbi Maxwell drove in the runs for Wesson.

Both teams have the following week off for spring break. Loyd Star returns to action Saturday in a tournament game against Magee. First pitch is set for 2:40 p.m.

A day after the Loyd Star Hornets swept the double-header Thursday night against Bassfield, the two teams faced one more... read more