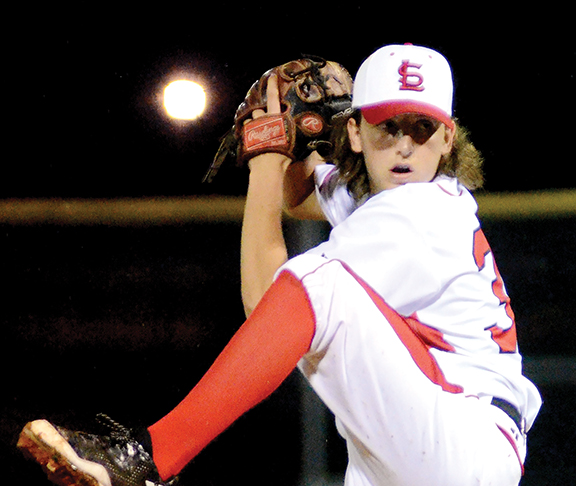 Freshman Tanner Watts pitched three shutout innings Thursday night against Bassfield, giving up no hits, one walk and striking out six in the win. (Photo by Dylan Rubino)

A day after the Loyd Star Hornets swept the double-header Thursday night against Bassfield, the two teams faced one more time Friday night as the Hornets once against handled business and won 12-0 in four innings.

The win continues tanimpressive start for Loyd Star at an 8-0 overall record. The three wins against Bassfield also moved the Hornets to 3-0 in district play.

The pitching for the Hornets has carried the team so far this season and sophomore Dane Smith continued that trend Friday Night. Smith pitched four shutout innings, giving up only one hit, no walks and seven strikeouts to pick up his first win as a starter this season.

Not only has the pitching been stellar, but also the offense shined in the three games against Bassfield. Loyd Star outscored the Yellow Jackets 45-2 in the three wins for the Hornets.

Senior Parker Flowers went 1-for-2 at the plate with two RBI to lead the run scoring for Loyd Star.

It’s been an impressive start for both the baseball and softball teams at Loyd Star, as each team owns a perfect record.

The competition gets tougher from here on out for Loyd Star as they’ll face Cathedral High School in Natchez Monday night and then a home game against Florence Tuesday night in the Lawrence County spring break tournament.

First pitch Monday against Cathedral is set for 7 p.m.