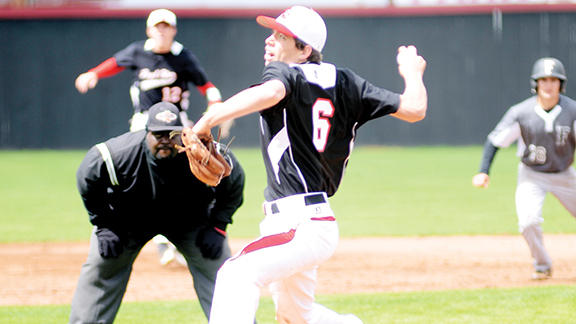 Photo by Dylan Rubino/Junior Cade Hodges of Loyd Star (6) takes his stride on the mound as he tossed a complete game shutout against Florence Tuesday afternoon.

MONTICELLO — It was a tough two-day stretch for the Loyd Star Hornets, but the team made a big statement Monday and Tuesday picking up key wins early in the season.

Led by the dominant performance by junior pitcher Cade Hodges, Loyd Star got their second win in two days Tuesday afternoon by shutting out Florence on day one of the Lawrence County tournament 3-0.

The win continues the undefeated start for the Hornets at 10-0. Loyd Star has been dominant in their first 10 games of the season, out-scoring their competition 85-8 and show no signs of slowing down.

“I’m proud of a good win against a quality opponent,” Loyd Star head coach Jared Britt said. “I thought we played well in each phase of the game. We did a really good job today of doing the small things right to push some runs across the plate.”

Hodges added another great pitching performance to his resume Tuesday afternoon in the win. The junior went the complete seven innings, giving up no runs on two hits, five walks and striking out 11 in the victory.

Hodges ran into some trouble in the top of the fifth inning, where he walked two and gave up a single to load the bases with two outs. Hodges threw a curveball and the batter swung and missed, but the ball traveled to the backstop and the runner from third got caught in a rundown trying to cross home plate. Hodges got out of the jam and cruised the rest of the way.

Senior infielder Konner Allen led the Loyd Star offense on the afternoon with two RBIs. In the bottom of the third inning, Allen capped off his performance by launching a solo homer to deep left field to make it 3-0 Loyd Star.

Senior Cole Smith and sophomore James Beard each had a double and Hodges had a single to round out the hitting total for Loyd Star.

A big opportunity stood in front of the Loyd Star baseball team Monday night as they took on Cathedral High School in Natchez.

Cathedral is coming off a 24-5 season in 2016 and has one of the best baseball teams in the state every season.

The Hornets came into Natchez looking to make a statement and that they did as they won a thriller on the road and picked up their best win of the season by a score of 11-9. The win continued the perfect start for Loyd Star at 9-0 and knocked Cathedral to 4-4 on the 2017 season.

“I felt like the boys played really hard and did not let the moment get too big for them,” Loyd Star head coach Jared Britt said. “It’s always good to get the win, but especially over there. Cathedral is hard to beat at home.”

Cathedral went a perfect 10-0 at home during the 2016 season and came into the matchup Monday night 2-0 at home.

The bats led Loyd Star to victory with 14 hits and 11 runs to show for it.

Loyd Star seemed to have the game in hand by the fourth inning, as the Hornets took a 9-0 lead heading to the bottom of the fourth.

The Green Wave came up big at the plate, scoring six runs in the half inning to trail 9-6 heading to the fifth inning.

Loyd Star was able to hang on thanks to relief pitching efforts of senior Konner Allen and junior Cade Hodges, who picked up the save. Senior Parker Flowers picked up the win as the starting pitcher to improve his record to 3-0.

Sophomore James Beard provided the spark at the plate for the Hornets, totaling three hits on the night, including two triples and a double.

Next up for Loyd Star is a district road game at Prentiss Tuesday afternoon. The Hornets will look to extend their 3-0 start in district play against the Bulldogs. First pitch is set for 3:30 p.m.