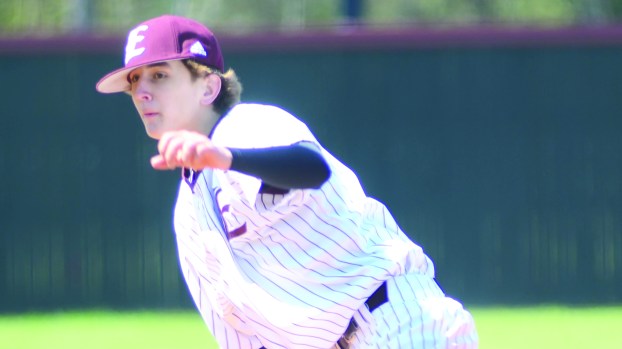 MONTICELLO — The Enterprise Yellow Jackets needed a bounce-back performance Wednesday afternoon against Mendenhall and they fought until the end, winning a back and forth contest to pick up the 4-3 win.

The win moves Enterprise to 8-3 overall and the loss dropped Mendenhall to 1-8 overall.

Enterprise head coach Cass Brister wanted a good response from his team after they lost 8-1 against Brookhaven on Saturday. His team responded in a big way, fighting off several ties and lead changes.

“I thought we did a really good job of battling today,” Brister said. “We didn’t play really well against Brookhaven and they really responded well and showed up today. I challenged them to do that and our pitching was really good today as well.”

Sophomore Landon Gartman came on in relief and shut the door down at a potential comeback for Mendenhall. Gartman pitched the last two innings and didn’t allow a run to score and struck out two batters as well.

The Tigers would strike in the top of the fifth with an RBI single by sophomore Christian Allen to tie the game at two.

Enterprise had another chance to take a big lead, but only managed one run across the plate with the bases loaded in the bottom of the fifth thanks to a fielders’ choice scoring the run from third to make it 3-2.

With the game tied at 3-3 in the bottom of the sixth, freshman Wyatt Burns hit a pinch-hit RBI single to center field to score the eventual game-winning run and gave Enterprise the 4-3 win.

Enterprise is off for the rest of the week and returns to action Tuesday as the host Bassfield in district play. Bassfield currently stands at 0-5 on the season, looking to get in the win column for the first time. Enterprise enters that matchup with a 3-0 record in district play. First pitch is set for 6:30 p.m.

MONTICELLO — It was a tough two-day stretch for the Loyd Star Hornets, but the team made a big statement... read more