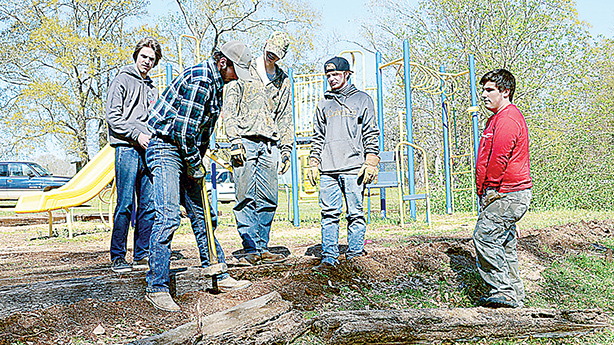 Hard work is what makes an Eagle

A project to improve the playground at the Exchange Club Park is Devine-ly inspired.

The park needed some routine maintenance and Brett Devine, a member of Boy Scout Troop 911 in Brookhaven, saw an opportunity to help the service club and achieve his Eagle Scout badge in the process. Devine, 17, worked with his scoutmaster Steve Smith to choose a project within the community and the park improvements was his top choice.

The project involves repairs and upgrades to the playground on the west side of the park. A marble marker there says the playground is dedicated to the memory of Dorman Dowdy, who was a member of the club.

Devine, along with a group of 10 other Scouts and four adults, are replacing decomposing railroad cross ties that border the playground. When that step is complete, they’ll move to lining the floor of the playground area with saw chip mulch.

Smith has been leading the troop, which is sponsored by First Baptist Church Brookhaven, for several years, and is also a member of the Exchange Club. Because he was aware of some repairs and improvements that were needed at the park, Smith included them in the list of project options available to Devine and other prospective Eagle Scouts.

Devine selected the project and submitted it to a team that included Smith, the troop’s Eagle Scout committee chair John Riggs and the district’s advancement chair Dave Pace. Devine’s job is to head the planning, help make necessary contacts, secure materials and financial assistance and manage a group of fellow Scouts — and adults — over a period of 50 to 150 work hours. He must keep track of it all and present it in a final paper and presentation to a board that will determine if he has done enough to merit the Boy Scouts of America’s highest achievement.

Devine said he joined the Boy Scouts because his best friend since preschool was involved, and he liked the idea of camping and everything that he saw the Scouts doing. That was seven years ago, and the teenager said Eagle Scout designation was the next logical step.

“I’ve come so far in Boy Scouts,” he said. “I can’t quit. Because the slogan — and the law — is something I want to live by.” The slogan says, “Do a good turn daily,” and the law states: “A Scout is trustworthy, loyal, helpful, friendly, courteous, kind, obedient, cheerful, thrifty, brave, clean and reverent.”

Devine is the fourth Eagle Scout candidate in Troop 911 since late last year. Nathan Boyd is next in line to complete his project for the ranking. He’s working on a project involving the flower beds at the rectory of St. Francis of Assisi Catholic Church.

Bad weather postponed the Brookhaven Exchange Club’s Spring Fling a week, but it’s back this weekend and organizers have added... read more