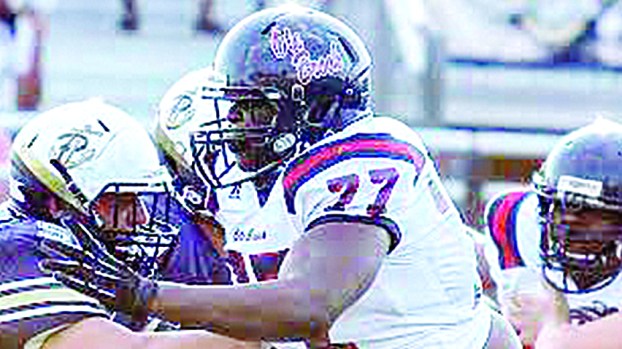 Over the past month, the scholarship offers for Johnson have been overwhelming.

Only a junior, Johnson still has another year left of high school football and has already received 11 Division 1 scholarship offers, including Ole Miss, Mississippi State and Southern Miss.

The 6-foot-3, 310-pounder has one more year to show college scouts what type of player he is and even with all of the offers already in hand, the recruiting process isn’t done yet.

“It really means a lot because I can trust myself to go further with myself,” Johnson said. “I’ve been working really hard. I didn’t know it would come this early since I’m only a junior. It’s been surreal.”

Johnson was one of the best players on a stout Panther defense in 2016. Johnson had 51 total tackles, including 33 solo tackles, nine sacks and averaged 4.3 tackles per game.

With a full season left to impress college scouts all across the college football world, Johnson still has high expectations for himself.

“I really want to show them how good of a football player I can be and how dedicated I am to the game,” Johnson said about his recruitment. “I’m going to give it my all every play and I’m never going to stop.”

The dream of playing college football is one step closer for Johnson, who’s been dreaming about the moment ever since he started playing football.

“A while back, I kept telling myself I wanted to play college football. I’ve been saying that to myself for the longest time,” Johnson said. “I’ve been working really hard on and off the field to get here.”

Johnson credits his run of scholarship offers to Brookhaven head coach and athletic director Tommy Clopton, who Johnson sees as a father figure.

“From my freshman year on, he’s really helped me put my name out there,” Johnson said. “He’s helped me out so much and I’m thankful for that.”

MONTICELLO — The Enterprise Yellow Jackets needed a bounce-back performance Wednesday afternoon against Mendenhall and they fought until the end,... read more