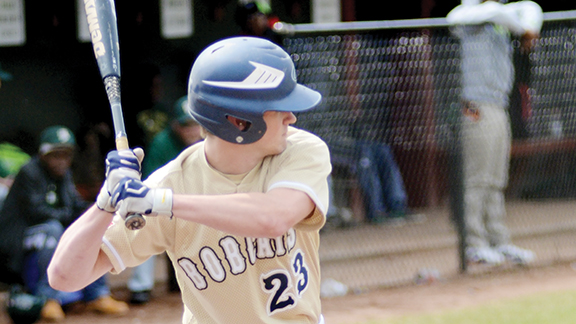 Senior Grant Leake of Bogue Chitto (23) steps in to swing in their 8-7 win over South Pike Thursday afternoon. (Photo by Dylan Rubino)

After getting thumped by Lawrence County in the Lawrence County tournament Wednesday, the Bogue Chitto Bobcats fought off a furious comeback by South Pike and won the game in eight innings by a score of 8-7 Thursday afternoon.

The win moves Bogue Chitto to 5-6 overall on the year.

The South Pike Eagles tacked two runs on back-to-back RBI singles to cut it to 7-2. Senior Grant Leake hit an RBI single to right field in the bottom of the fourth to make it 8-2 Bogue Chitto.

Things would get out of hand in the top of the fifth inning. The South Pike Eagles would load the bases with the score at 8-3, and the Eagles responded by clearing the bases with a three RBI double to cut the Bogue Chitto lead to 8-6. South Pike added to their lead on a wild throw to third base on a steal attempt, scoring the runner from third to make it 8-7. The Eagles added another run on an RBI single to tie the game at 8 to end the inning.

The game would go scoreless for the final two innings and extras would decide the winner. With the Bobcats threatening with runners on first and second in the top of the fifth, a wild throw by the South Pike pitcher to first base scored the runner from second and gave Bogue Chitto the much needed win.

“I’m glad we escaped with the win. We’re still getting better as a team as the season goes along,” Bogue Chitto head coach Tony Davis said. “It wasn’t a great game today, but we pulled it out and I’m proud of them for that.”

Davis admitted that his team could’ve played better, but he’s happy his team won in a way they’re not accustomed to playing.

“It was a wild one, but we want to play our best when the end of the season comes along,” Davis said. “They’ll learn from this.”

The Bobcats opened up in the Lawrence County tournament Wednesday afternoon against the hosting Cougars and fell by a score of 11-1 in six innings.

“We did play well for about four or five innings against them,” Davis said. “Games like that will make us better down the road.”

Lawrence County jumped on the board first with two runs in the bottom of the first inning to take the 2-0 lead.

Junior Eli Wallace got the Bobcats on the board with an RBI single down the left field line to score the runner from second to cut the deficit to 2-1.

It was all Lawrence County from there on out. The Cougars combined for nine runs in the final four innings to stretch the lead and win 11-1 in six innings.

Wallace was the leader on offense for Bogue Chitto with the lone RBI of the game.

Senior Marcus Atterberry led Lawrence County Wednesday afternoon going 2-for-4 at the plate with two RBIs and three runs scored for the game. Sophomores Marquez Hudson and Payton Little each had two RBIs to lead he Cougars.

Next up for Bogue Chitto is a home game Friday against Natchez. First pitch is set for 7 p.m.

Below are the most current reports on  fishing conditions of lakes in the area. Information courtesy of the Mississippi Department... read more