Alleged murder suspect fatally shoots himself after chase on I-55

A man allegedly wanted for a double murder in Texas killed himself in a Pike County field after a chase with troopers on northbound I-55 today.

Troopers were notified around 4:30 p.m. of a white Ford Escape with Texas plates crossing the Louisiana-Mississippi state line on I-55, said Mississippi Highway Patrol spokesman Brandon Fortenberry. The vehicle and tag matched that of a suspect wanted in a double homicide in Texas that occurred Wednesday, he said.

Fortenberry said the trooper was going to wait for backup to arrive before he attempted to make a felony traffic stop. The troopers attempted to make the stop on Delaware Avenue in McComb. The subject, a white male, traveled back to northbound I-55, he said.

The chase included five or six MHP units traveling at speeds over 100 mph, he said.

The suspect took exit 24 off I-55 at Lake Dixie Springs, just south of the Lincoln County line.

From there, he traveled east to Hwy. 51, and headed south toward Summit.

About one mile north of Summit, the subject fled into an abandoned field. “When reaching the back of the field the subject came to a stop and the chase was ended,” Fortenberry said.

Mississippi Bureau of Investigation was on the scene at 6 p.m., he said.

Warren Strain, communication director for the Mississippi Department of Public Safety, confirmed the suspect died from a self-inflicted gunshot wound. He would not say whether the suspect was Randall Lee Burrows, 54, of Lakeway, Texas.

According to media reports in Texas, Richard Dale Guthrie and Susan Gulla-O’Leary, both 60 years old and from Austin, were identified Friday as the two victims in a double-homicide in Travis County. Burrows was identified as a suspect in the deaths and left the scene in a white Ford Escape with a tag that matched the tag on the vehicle troopers stopped in Pike County.

Burrows allegedly shot three people over a business dispute on Wednesday, according to Texas media reports.

Authorities found a man and woman dead in the front yard of a private residence. They’d been shot in the head. The third victim, a woman found with gunshot wounds in a home in the same area, is said to be in critical condition. 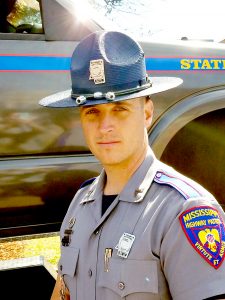