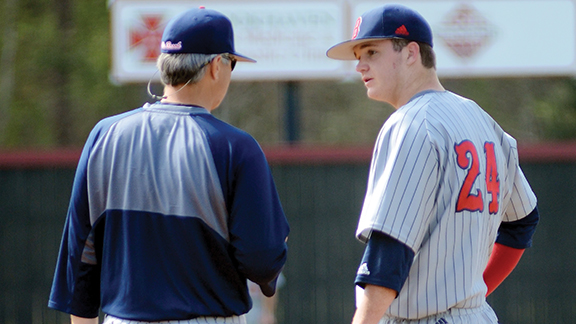 Sophomore Coker Wright of Brookhaven (24) meets with an assistant coach to regroup during their 3-2 win over Wesson Thursday afternoon. Brookhaven beat Wesson, Florence and Magee to move to 6-5 overall. (Photo by Dylan Rubino)

The Panthers wasted no time in getting on the board in the top of the first. With one out and runners on the corners, senior Tate Walley hit an RBI single to bring in the first run of the game to make it 1-0.

Junior Trace Owens led off the top of the second with a double. With one out, junior Clint Stephens brought in a run on a sacrifice fly to make it 2-0. Sophomore Jacob Porter brought in the final two runs of the inning on a two-RBI single to increase the Panther lead to 4-0.

In the top of the fourth, the Panthers loaded up the bases off singles from freshman Byrion Robinson, sophomore Lane Smith and junior Clint Stephens. Junior Tyler Mixon cleared the bases with an RBI double to make the score 7-0 Brookhaven. Porter found his way onto base with a single and Walley brought Porter home on an RBI single to make it 8-0. With one out and runners on first and second, Walley touched home plate on a wild pitch past the catcher to make it 9-0. Owens brought in the final run of the inning on a sacrifice fly to end the inning at 10-0.

With two outs in the top of the fifth, senior Landon Partridge brought in the Panthers’ final run on an RBI single to left field to give Brookhaven the 11-0 win.

Sophomore Slay Acy got things started for the Cobras in the top of the first inning, hitting a single past third base and senior Will Hulon followed with a single past second base. Senior Preston Middleton brought in Acy for the first run of the game with an RBI single to make it 1-0.

With two outs in the top of the second, senior Jimmie McQuage hit a RBI double and sophomore Derek Freeman quickly followed with an RBI single to increase the Wesson lead to 3-0.

Salem would start to cut into the deficit in the bottom of the fifth. With one out and runners on the corners, Salem scored on a wild throw to second base. Senior Will Boyd brought in Salem’s third run on an RBI single then junior Tanner Polk hit an RBI double, bringing Salem within one at 5-4.

Wesson scored three more runs in the top of the seventh off of a wild pitch past the catcher and two sacrifice flies from McQuage and Freeman and took the 8-4 win.

Magee’s Keshun Collier led off the game with a walk, then managed to steal second base. Sophomore Timmon Kennedy for Magee started the scoring with an RBI single and gave the Trojans a 1-0 lead. Juniors Aimon Chisholm and Dalton Cockrell each drove in runs with RBI singles to make it 3-0 Magee.

With two outs and runners on first and second base Brookhaven senior Penn Wilson hit a three-run homer to tie the game up at 3. Senior pitcher Tate Walley kept Magee scoreless in the second and third inning.

In the bottom of the third with one out, Walley hit an RBI single and sophomore Coker Wright blasted a three-run homer to give the Panthers the 7-3 lead.

Tate Walley picked up the win for Brookhaven by pitching 6.2 innings, giving up five earned runs on 11 hits, six walks and striking out nine batters. Senior Dalton Fortado got the final out in relief of Walley on the mound.

Wesson senior Alex Mooney took a shut out into the sixth inning, getting run support in the third and fourth inning. Mooney finished the game throwing six innings, giving up two earned runs on three hits, seven walks and eight strikeouts. Mooney nailed a double into left field to score the first run of the game for Wesson to make it 1-0. In the bottom of the fourth, Wesson loaded the bases and senior Preston Middleton hit a sacrifice fly into right field and brought in Wesson’s second run of the game.

Trace Owens picked up the win for Brookhaven by pitching 2.2 scoreless innings.