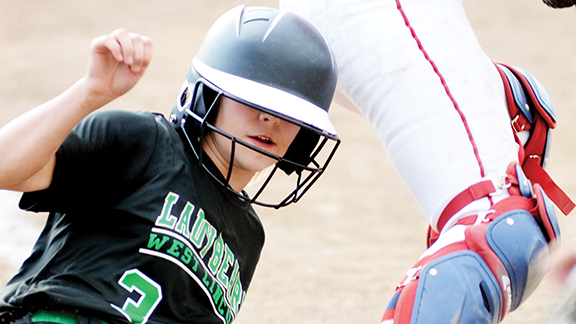 Freshman Ashley Tabor of West Lincoln (3) slides into home past the Brookhaven catcher in the Lady Bears’ win over the Lady Panthers. (Photo by Dylan Rubino)

With the Brookhaven Lady Panthers and West Lincoln Lady Bears winning their first games of the Lady Panther softball tournament Friday, the two teams would meet up in a Lincoln County showdown.

The Lady Bears used a five-run fifth inning to get the best of the Lady Panthers and took the 6-2 win.

“It means a lot for us to get this win,” West Lincoln head coach Andrew Redd said. “We played a good game today. We still had too many innings where we left runners on base, but we did come through in the fifth inning.”

“We have to cut down on errors and keep battling the entire game,” Brookhaven head coach Mandy Vinson said. “We didn’t hit very well tonight.”

West Lincoln jumped on the board first in the top of the first inning to take the early 1-0 lead.

Pitching led both teams for most of the game, as the game remained 1-0 West Lincoln heading to the fourth inning. West Lincoln would load the bases, but the Lady Panthers stranded the runners and got out of the jam without giving up a run.

Brookhaven tied the game in the bottom of the fourth inning with an RBI triple followed by an RBI groundout to score the runner from the third to give the Lady Panthers the 2-1 lead.

West Lincoln took control of the game in the top of the fifth inning. Sophomore Kelsey Freeman tied the game with an RBI single at 2-2. Freshman Bailey Wilson followed up with an RBI single to center field to give the Lady Bears the lead at 3-2. The single by Wilson loaded the bases, but were soon cleared thanks to a three RBI double by Bailee Goodson to give West Lincoln the commanding 6-2 lead.

The dominant fifth inning ended up being the deciding factor and gave West Lincoln the 6-2 win over district rival Brookhaven.

Costly errors put the game out of reach in the fifth inning for Brookhaven as West Lincoln took advantage of the runners on base and put the game away.

In the first game of the afternoon, the hosting Brookhaven Lady Panthers jumped on the scoreboard early and put the game out of reach by the third inning, winning easily 11-2.

Thompson also got the win on the mound for the Lady Panthers, going all five innings and giving up two runs (no earned) on three hits, four walks and struck out three.

West Lincoln started their tournament run with a convincing 13-0 win in four innings over Terry in the Lady Panther softball tournament.

Sophomore Megan Gerald pitched a great game on the mound, going all four innings and gave up no hits and no runs while striking out six.

Five errors by the Terry Lady Bulldogs put runners on base for the Lady Bears and they took advantage of the opportunities.

Sophomore Skylar Hall led the way on offense with a triple and a single for the afternoon.