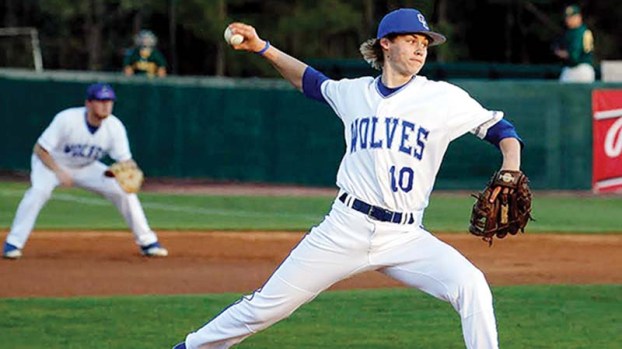 Hunter Fortenberry, a freshman from Pearl, got the win for the Wolves in a game played recently. (Photo submitted)

The Wolves move to 8-11 on the year and 3-1 in MACJC play after Co-Lin split a double header with the Mississippi Gulf Coast Bulldogs on Wednesday night.

Co-Lin dropped the first game, a nine-inning contest, by a final of 9-6, but rallied in the seven-inning nightcap and won 5-1.

The Wolves are on the road Saturday as Co-Lin travels to Scooba to take on the Lions of East Mississippi. First pitch is scheduled for 2 p.m.

The Wolves appeared to be in the drivers seat for most of game one as the Wolves led 3-1 through four complete innings. CJ Estave drove in Hayden White in the first inning with a double, Conner Wilkinson singled and scored Tyler Vroman in the second, and Kody Smith brought home White with a single in the third.

The Bulldogs cut the lead to just one, 3-2, in the top of the fifth with a double down the left field line.

In the sixth, the Wolves stretched the lead to 4-2 after the Bulldogs balked with Austin O’Flynn on third.

A single in the top of the seventh plated one for Gulf Coast and again narrowed the Wolves lead to one run, 4-3.

Estave showed poise in the bottom half of the inning as he drove in Matthew Mordecai, who reached base after being hit by a pitch, to give the Wolves a 5-3 advantage.

The Bulldogs had a big inning in the top of the eighth, as four runs scored after two batters were hit by pitches, a walk, and an error. The Bulldogs led 7-5 going into the bottom of the eighth.

Co-Lin added one run in the bottom half after a fielding error brought home Tyler McLeod to cut Gulf Coast’s lead to 7-6.

The Bulldogs plated two more in the top of the ninth with a sacrifice bunt and a hard hit single to score the final runs of the contest.

Five Wolves saw action from the mound with Zach James getting the start. James threw 4.1 innings and gave up two runs (one earned), four hits, two walks, and struck out three. Anthony Clapp suffered the loss for Co-Lin after just one inning. Clapp gave up four runs (two earned), one hit, one walk, and struck out two. Other pitchers for the Wolves included Steven Ginn, Blake Sigrest, and Ryan Cullop.

Ty Barnes started for the Bulldogs and threw five innings. Barnes gave up three runs (all earned), six hits, and two walks. Mason Sullivan got the win for Gulf Coast after 1.1 innings. He gave up one run (unearned) and one hit.

The contest was scoreless until the bottom of the third when Estave singled with a fly ball to center field. The hard hit ball scored both O’Flynn and Wilkinson and gave Co-Lin a 2-0 lead.

Co-Lin added another three in the bottom of the fifth inning. An error and a RBI single from Hayden White scored the runs.

The Bulldog’s lone run came in the top of the sixth after an error allowed a Bulldog to reach home.

As West Lincoln and Enterprise met up in a Lincoln County matchup Thursday night, the local games continue on Friday... read more