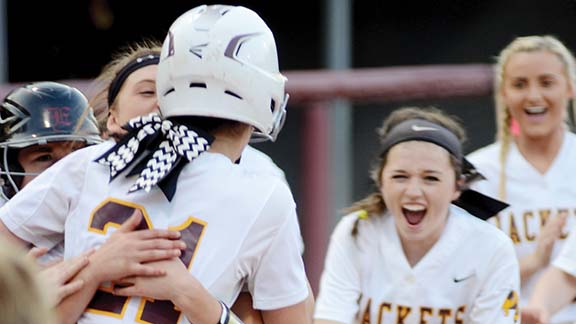 Abby Richardson of Enterprise (21) is greeted by teammates, including Haley Nations (15) at home plate after hitting a two-run homer in the bottom of the third inning in their 4-1 win over West Lincoln Thursday night. (Photo by Dylan Rubino)

Thanks to a stellar pitching performance by Haley Nations and timely hitting, the Enterprise Lady Jackets got a much-needed win over Lincoln County rival West Lincoln Thursday night by a score of 4-1.

The win moves Enterprise to 4-7 overall and the loss drops West Lincoln to 5-4 on the season. The win also gives the Lady Jackets their first win in district play.

West Lincoln has now dropped two games in a row, both to Lincoln County schools.

“West Lincoln is a great team and a great program, but it’s always good in the county any time you beat a rival county school,” Enterprise head coach Charissa Burke said. “It’s a great feeling and the girls showed up to play tonight.”

Nations was dominant from start to finish on the mound and fought off a good West Lincoln lineup to get the win. She pitched the complete seven innings, giving up one run on two hits and striking out 13 batters in the game.

After giving up a run in the first inning, Nations settled in nicely and controlled the game the rest of the way.

“Haley was definitely on her game,” Burke said. “She worked ahead most times in the count and the defense played well behind her.”

With the score tied at 1-1 in the bottom of the third, seventh-grade shortstop Abby Richardson hit a deep two-run homer to left-center field to give Enterprise the 3-1 lead. The bomb by Richardson provided a spark that Enterprise needed to come away with the victory in the end.

“That homer really helped us,” Burke said. “It gave everybody that lift they needed to keep going.”

Kaylie Burgess hit an RBI single to left-center field in the bottom of the fourth to increase the Enterprise lead to 4-1.

West Lincoln threatened to make a comeback in the top of the fifth inning. With runners on first and second with one out, senior catcher Makennah Redd hit a line drive single to center field to load the bases for West Lincoln. One hit could tie the game for the Lady Bears.

However, Nations struck out the following batter and got a line out to second base after that to get out of the jam and hold the lead at 4-1.

Nations sat down the side the rest of the way and the Lady Jackets took home the 4-1 victory.

The Enterprise Lady Jackets have had some tough losses earlier in the season, but Burke is proud of her team for fighting the entire game and getting the win against a rival school.

“The girls have lost some really tough games this year, but tonight, I could tell they were very focused and very into the game. They came to play tonight.”

Next up for Enterprise is a home game Friday against Brookhaven. Next for West Lincoln is a road game Friday at Wesson. Both games are set to start at 6:15 p.m.