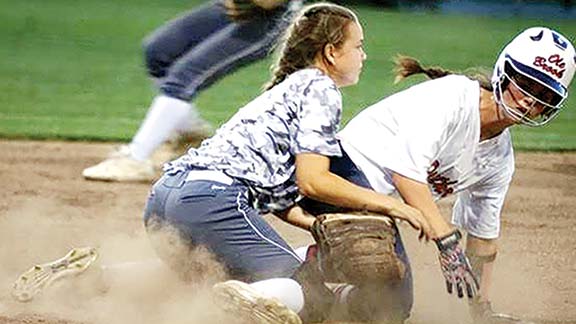 Coming off two wins in a row over the weekend, the Brookhaven Lady Panthers ran into a very good Lawrence County team Tuesday evening, losing by a score of 11-2.

The loss drops Brookhaven to 8-4 overall and the win moves Lawrence County to 6-3 overall.

The Lady Panthers fought hard Tuesday night, but 10 errors by the team eventually did them in and mistakes proved costly in the end.

The majority of the errors came in the first three innings, where the Lady Cougars took advantage of the opportunities early and pounced to an 8-0 lead through three innings.

The Lady Panthers got on the board in the top of the fourth inning thanks to a sacrifice fly by sophomore Kat Wallace, scoring senior Cheyenne Motley from third to move the Lady Panthers to 8-1.

Brookhaven continued chipping away at the Lawrence County lead in the top of the fifth inning when Thompson hit a ground ball to the Lawrence County second baseman that went past her because of an error, which scored freshman Madi Miller from third to cut the deficit to 8-2.

Lawrence County would pull away in the bottom of the fifth with a two-RBI triple from Maddux Kirkland to make it 10-2 Lady Cougars.

Lawrence County added one more run in the bottom of the sixth inning to give the Lady Cougars the 11-2 win over Brookhaven.

Seniors Macy Ziskin, Tia Bussey, Motley and freshman Madi Miller each had one hit to lead the Lady Panthers on the night.

Kirkland led the way for Lawrence County on the night, going 2-for-4 at the plate with four RBIs.

Next up for the Brookhaven Lady Panthers is a road game tonight at Natchez in their first district game of the season. First pitch is set for 5 p.m.