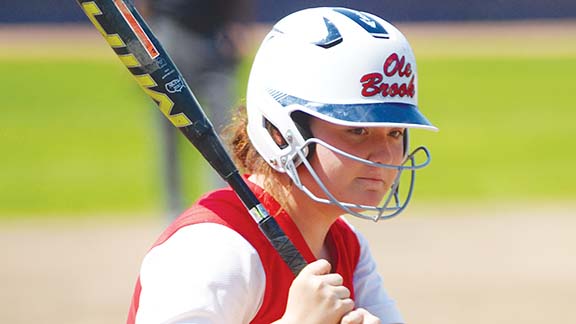 Madison Thompson of Brookhaven steps into the batters box in a game earlier this season. (Photo by Dylan Rubino)

With district play coming into full swing, these matchups are critical to the outcome of the season and will determine who is in the best position to stay atop in the second half of the softball season.

The Loyd Star Lady Hornets continue to be the most impressive team in the Lincoln/Copiah county areas with a perfect 12-0 record and 1-0 so far in district play.

The Lady Hornets got the crucial district win against West Lincoln Tuesday night by a score of 3-1 and proved they can win games in multiple ways. Loyd Star has outscored their opponents 83-13 on the season, but used their pitching and defense to take down the rival Lady Bears Tuesday. Senior Makenzie Smith was stellar in her start, pitching the complete seven innings, giving up one unearned run on two hits and striking out 12 batters in the game.

Smith has been one of the best players on the team this season and if they get great pitching performance from her and stellar defense behind her, Loyd Star will be tough to beat down the stretch.

The Bogue Chitto Lady Cats come into the matchup on a two-game winning streak and 7-5 overall on the season, including 1-0 in district play.

The district win came Tuesday night at home against Mount Olive, where the Lady Cats dominated by a score of 20-0. Bogue Chitto also took down Wesson on the road Monday night by a score of 4-2.

The senior combo of Terrah Nelson and Cherie Savoie have been crucial to the team’s success at the plate so far this season. The two have combined for 30 hits and 24 RBIs on the season. Freshman Codi Leggett has been the ace of the staff for Bogue Chitto. The freshman is 6-5 as a starter with an impressive 1.78 ERA.

This will be a fun matchup between the two Lincoln County schools Friday night.

Coming off a tough loss to Lawrence County Tuesday night, the Brookhaven Lady Panthers bounced back with a win over district opponent Natchez Thursday.

Now the Lady Panthers will have to quickly shift their attention to county rival Enterprise.

Brookhaven head coach Mandy Vinson has said her team is very young, but very talented all season long and they’ve shown that during many games.

This will be the first matchup between the two schools and the winner gets the momentum needed to finish the second half of the season strong.

Their matchup against West Lincoln could be their most important game of the season, especially with the sting of two close losses to two Lincoln County schools still there.

However, even with a 5-4 overall record, the West Lincoln Lady Bears have proved to be one of the best teams in the area. Pitching has been the key for West Lincoln so far by only giving up 28 runs to opponents.

Their four losses have come against Lincoln County schools, so a win tonight against Wesson will surely give the team confidence that could really help them down the road.

Thanks to a stellar pitching performance by Haley Nations and timely hitting, the Enterprise Lady Jackets got a much-needed win... read more