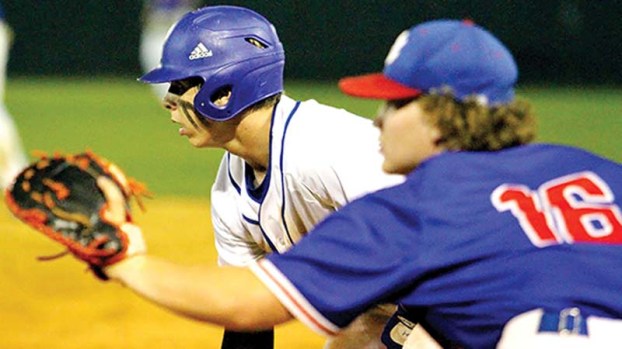 Photo by Sherylyn Evans/Nick Ogden of Brookhaven Academy takes his lead off first base in the Cougars’ 7-2 loss to Simpson Academy Tuesday night.

Simpson jumped out early by posting three runs in the first inning and scattered four more runs throughout the game, which proved to be enough as Brookhaven Academy could only cross home plate twice in the contest.

“We had some situations that we just didn’t capitalize on early in the ballgame,” BA head coach Tyler Parvin said. “Give Simpson credit. They made some big defensive plays when they had to.”

Taylor Freeny led the Cougars in hitting with two singles. O’Neill Burgos added a double while Nick Ogden and Justin Burt each singled to round out the Cougar offense.

Brookhaven Academy will be back in action tonight as they travel to Simpson Academy to complete the district series. This is a change from the previously scheduled games on Friday because of expected weather concerns. Junior varsity first pitch is scheduled for 5 p.m. followed by varsity action at 7 p.m.

The Loyd Star Hornets handled business as usual Tuesday night as they got great hitting and pitching performances in their... read more