A reception was held at Hampton Inn immediately following the service.

Mr. Ratcliff was a 1960 graduate of Brookhaven High School, and left in 1965 to work for Ashland Oil in Ferriday, Louisiana. After holding various positions with Ashland in Ferriday; Ashland, Kentucky; New Orleans, Louisiana; Tyler, Texas; and Houston, Texas, he retired in 1999 as regional security manager. He graduated from both Copiah-Lincoln Junior College with an associate of arts degree and the University of Southern Mississippi with both bachelor of science and master’s degrees. Following his retirement, he attended and graduated from the Police Academy at Kilgore College, Kilgore, Texas, obtaining his Texas Peace Officer’s license. He worked with the Henderson County Constable’s Office, Grayson Community College and Grayson County Sheriff’s Office in various positions before becoming a full-time retiree.

Preceding him in death were his parents; and sister, Virginia Ratcliff Thompson; and a half-brother, Jimmy McKee. 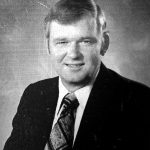