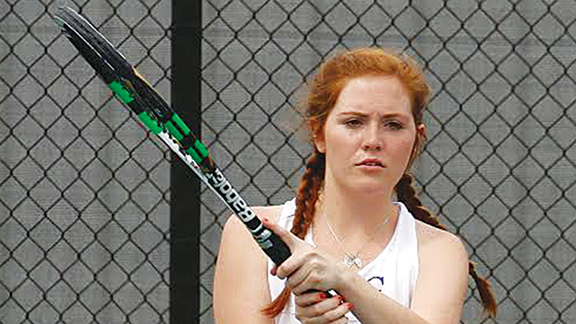 Copiah-Lincoln’s Community College’s men’s tennis team hung on to win a hard fought match with the Hinds Eagles over the weekend in Wesson. The win moves the Wolves to 5-3 on the season.

“This was a big division win that will give us momentum heading into our toughest stretch of the season,” said head coach Blake Smith. “We have Meridian, Jones and Gulf Coast this week so this will challenge us physically, but prepare us for state in a few weeks.”

In doubles, Sebastian Osorio and Juan Pablo Pinilla paired up at No. 1 to defeat John Dennis and Daniel Yepez 8-2. The Wolves dropped No. 2 as Tripp Case and Cory Alderman fell 8-4 to Chris Crapps and Matthew Burks. Hayes Thompson and Sebastian Harrell played the No. 3 slot for Co-Lin but lost 8-4 to Victor Villereal and Aaron Galloway.

The Hinds Community College Lady Eagles defeated the Lady Wolves over the weekend 6-3 after back and forth action. The loss moves Co-Lin to 4-3 on the season with the team’s most difficult stint of the season approaching as the Lady Wolves face off with Meridian, Jones, and Gulf Coast this week.

“Hinds was a top three team last year so I was very proud of our ladies effort on the court,” said Smith. “Chantel Quarles and Bayli Battle played some strong singles matches and showed their experience.”

The Lady Eagles grabbed two doubles courts to take a 2-1 lead heading into singles play. Co-Lin’s No. 1 doubles team, Laura Vargas and Ximina Daza, lost 8-1 to Stefy Varon and Marianna Alvarez, while Co-Lin’s Bayli Battle and Susanna Ratcliff fell 8-1 to Chen Elizar and Mary-Neely Myers at No. 2. Maddie Ogden and Chantel Quarles teamed up at No. 3 doubles and picked up an 8-2 victory for the Lady Wolves over Jordan Warren and Brook Myers.

The semi-pro football team, the Mississippi Lions, is set to open their 2017 football season on the road Saturday when... read more