Little Jimmy Dickens slept here: Historic hotel facade gets an upgrade thanks in part to the Brookhaven Trust 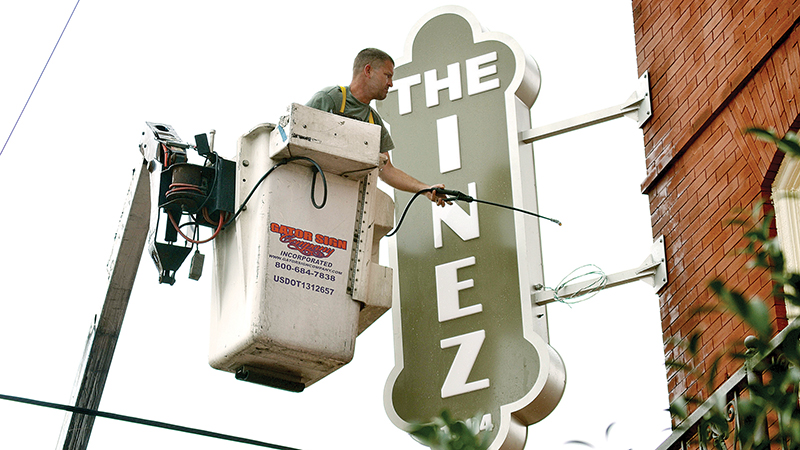 The newest addition to the historic Inez hinges on the red-brick façade as well as the past.

Built in 1904, the three-story brick structure was constructed in the “Romanesque Revival” architectural style, and is included in the National Register of Historic Places.

The sign, placed on the corner of the building facing East Monticello and South Railroad streets, is reminiscent of the original sign that identified the Inez Hotel to passerby and guests.

The hotel closed in 1975, but was renovated and reopened as an apartment building by Paul Jackson around 1998.

Lynch purchased the property in 2005 and is the current owner of The Inez. With a desire to make the building recapture more of its original image, Lynch approached the Trust with a request for help procuring a new sign. The plan was to erect a sign that looked as much like the hotel’s original one as possible, said Inez manager Ed Williford.

“We approved his request,” said Trust director Mary Phillips White, “and are contributing 50 percent with a $8,000 cap.”

Within just a couple of months, Williford said, the sign was up.

Reddit owns the company with his wife, Cindi, and Bart Allen, of Brookhaven.

Though converted into apartments on the second and third floors, the old hotel has its share of historic tales.

The late George Martin worked for the hotel for nearly 70 years, beginning in 1929. He told The Daily Leader in 1987 that he recalled many famous people staying at the hotel, as well as some rather unsavory characters.

“A lot of important people stayed here,” Martin said, including U.S. Congressman Percy Quin and billionaire Howard Hughes. “Little Jimmy Dickens stayed in Room 36. He came through with a traveling show along with Minnie Pearl and Uncle Dave Macon,” he said.

Martin said the original lobby was on the west side of the building, and the current lobby was a showcase or “drummers” room.

Traveling salesmen were nicknamed “drummers” because they were always trying to drum up business. Martin said he always made good tips helping the drummers unload their wares at the railroad station and help set them up for display in the drummers room.

The Brookhaven Trust, established over 25 years ago, is committed to preserving the city’s heritage and to promoting cultural events in the community.

The group supports Mississippi Scholars financially, and only holds one fundraising event per year — the Taste of the Trust, in November.

Recent projects included assisting with façade updates for Betty’s Eat Shop and Fred’s, assisting with downtown rooftop lights and donating $25,000 to the Brookhaven Little Theater for renovation of the Marquee Room.

The Trust’s most recent project was assisting with a sign for the Inez in the heart of downtown.

Future Trust projects have not been identified. “We have a few projects in early stages,” White said, “but nothing has been finalized.”

She added, “The Trust is always working to improve the downtown area.”