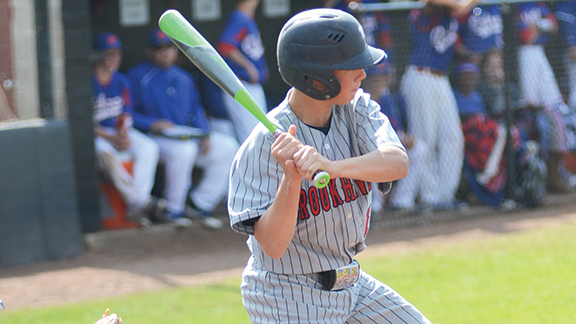 Corbin Falvey prepares to swing in a recent game. (photo by Dylan Rubino)

Brookhaven knocked West Lincoln off its perfect pedestal in the Wesson tournament over the weekend.

West Lincoln entered the Saturday game at 13-0, but saw the streak come to an end against the red hot Panthers by a score of 8-2.

The game was a scoreless, pitching duel through the first two innings.

Lane Smith led off the top of the third with a single for Brookhaven. The Panthers scored the first run of the game on a throw past first base, then Penn Wilson hit an RBI double with one out to take a 2-0 lead. Jacob Porter and Corbin Falvey hit back-to-back RBI singles after that. Johnny Bowman finished the inning with an RBI sacrifice fly to give the Panthers a 5-0 lead after the top of the third.

In the top of the fifth, Tate Walley hit an RBI sacrifice fly to give Brookhaven a 6-0 lead.

In the bottom of the fifth, West Lincoln threatened by loading the bases. The Bears scored one run on a balk call, then Gabe Nations walked with the bases loaded to cut the Brookhaven lead to 6-2.

In the top of the sixth, the Panthers scored on an obstruction call followed by Clint Stephens bringing in the final run of the game on an RBI single to give Brookhaven the 8-2 win.

Wilson picked up the win for the Panthers while Seth Bivens took the loss for West Lincoln.

Wesson scored its only two runs of the game in the bottom of the first inning. The Cobras scored on a pitch past the catcher then scored on a RBI sacrifice fly from Jimmie McQuage to give the Cobras the 2-0 lead.

Wesson kept Brookhaven scoreless through three innings. With one out in the top of the fourth, Walley hit an RBI single to get Brookhaven on the board at 2-1. With two outs and runners on the corners, Coker Wright hit an RBI Single to tie the game at 2-2. The Panthers would score once more on a throw over second base to give the Panthers the 3-2 lead.

In the top of the seventh with two outs, Tyler Mixon singled and Wilson followed with an RBI single to bring in the final run of the game.

Tate Walley picked up the win for the Panthers. Jeremy Smith took the setback for Wesson.

The Bears loaded the bases in the top of the first. With two outs, Austin Burris hit a two-run RBI single to give West Lincoln a 2-0 lead. Wesson got out of the inning without allowing another run across.

In the top of the second, the Bears once again loaded the bases. Kyler Fielder hit a two-run RBI single to give the Bears the commanding 4-0 lead.

In the bottom of the second, Wesson loaded the bases with no outs. Despite Cade Lowery hitting into a double play, Wesson brought in a run to make it 4-1.

Wesson score their final two runs in the bottom of the fourth on a pitch that managed to get past the catcher and off an RBI double by Payton Burns to make it 4-3 West Lincoln.

In the top of the sixth, West Lincoln scored three runs to blow the doors open. With no outs and runners on second and third, Garrett Maxwell hit an RBI single and Nathanael Addison followed with an RBI sacrifice fly. The Bears would tack on two more runs to give them the 7-3 win.

Daniel Spears picked up the win for the Bears. Alex Mooney took the loss on the rubber for Wesson.

BA Cougars fall on the road to Simpson

MENDENHALL — The Brookhaven Academy baseball Cougars were looking to even up the district series as they traveled to Simpson... read more