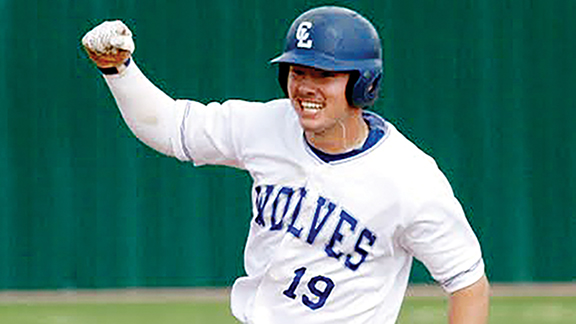 Conner Wilkinson, a freshman from Vicksburg, celebrates as he rounds second base after his first career home run in their win Tuesday. (Photo by Lucas Calvert)

The Wolves won game one, an offensive showcase, 17-10, but fell 7-6 in eight innings in the nightcap. The loss gives the Bears the two of three in the series this season and the Coca-Cola Challenge trophy.

The results move Co-Lin to 9-14 on the season and 4-4 in MACJC play. Co-Lin is back in action Saturday as the Wolves travel to Northwest to take on the Rangers.

The Wolves posted 15 hits in game one while the Bears added 18 in a marathon game. The Bears struck first in the top of the second inning with an RBI single. Co-Lin fired back in the bottom of third with a two-run homer from Tyler McLeod and an RBI single from Kody Smith. Going into the fourth Co-Lin led 3-1.

Co-Lin added four more runs in the bottom of the fourth off a two-run shot from Conner Wilkinson, an RBI double from Jaylyn Williams, and an RBI single from Austin O’Flynn. The big inning stretched the Wolves’ lead to 7-1.

The Bears clawed back in the top of the fifth with two scores coming from players hit by pitch. Southwest added another with a single to right field.

The bats remained hot for the Wolves as another four runs came in the bottom of the fifth. Wilkinson drove in one with a single, Williams plated two with a triple, and Smith pushed home another with a single.

In the sixth Wilkinson plated yet another, while a wild pitch provided the Wolves with even more of a cushion. Co-Lin led 13-4 going into the seventh.

Southwest had a big top half of the seventh as six runs crossed the plate on seven hits. The offensive explosion cut the Wolves’ lead to just four, 14-10.

Estave blasted a three-run homerun to centerfield for Co-Lin in the bottom of the eighth inning to give the Wolves a 17-10 lead.

Three relievers helped the Wolves close out the victory. Anthony Clapp threw two and a third innings. Clapp recorded the last seven outs to earn the save for the Wolves. Coleman took the loss for Southwest. He threw three and a third innings, surrendering six runs, five hits, and striking out three.

The Bears lit up the score board first in game two as a hit batter with the bases loaded and a fielder’s choice gave Southwest a 2-0 lead after half an inning of play.

Williams continued his hot streak into game two as he slapped a triple to right field to score McLeod and cut the Bears lead to just one. Southwest stretched the lead to 3-1 in the top half of the second with an RBI single.

The Bears added three more runs in the top of fourth, as back-to-back runners were walked home with the bases loaded and a third scored on a wild pitch.

Williams cut into that lead in the bottom half of the inning with a two-run homer to centerfield. The moonshot cut the Bears lead to just three, 6-3.

In the sixth, O’Flynn ripped a double for Co-Lin to plate Williams to narrow the lead even more.

The Wolves scored two in the bottom of the seventh as Conner scored on a ground out, and Matthew Mordecai scored on a wild pitch. The thrilling inning tied the game 6-6.

Southwest scored in the in eighth inning on a fielder’s choice and pulled away to a 7-6 lead. The lead proved enough as the Wolves went three up three down to close out the contest.

Williams and O’Flynn were the only multi-hit Wolves as both had two apiece. McLeod, Smith, and Conner posted one each. Williams also led Co-Lin in RBIs with three.

The Ole Brook tennis team moved to 5-2 on the season with a hard fought win over Germantown Tuesday afternoon... read more