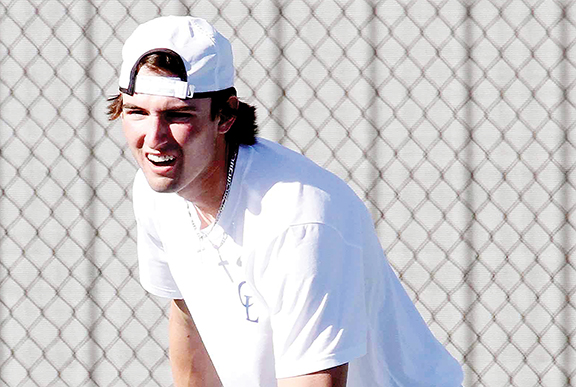 Haynes Thompson of Co-Lin gets ready to serve as the Wolves fell to Mississippi Gulf Coast Community College earlier this season. (Photo submitted)

The Copiah-Lincoln Community College Wolves outlasted the JCJC Bobcats to win 5-4 in a match that lasted over six hours Wednesday afternoon. The win moves the Wolves to 6-3 on the season.

“This match was big for us because they beat us at their place a few weeks ago,” said Co-Lin head coach Blake Smith. “We played several hard-fought matches…this will help us develop that mindset we need for the state tournament.”

Co-Lin took two of three doubles courts to start the day. Sebastian Osorio and Juan Pablo Pinilla played No. 1 and defeated Taqel Lewis and Diego Leal 8-6. Cory Alderman and Tripp Case paired up at No. 2 doubles and won a barnburner match, 9-8 (7-3) over Brandon McCary and Chase Pennington. The Wolves fell at No. 3 doubles 8-4. JCJC’s Jacob Bozeman and Luke Armstrong defeated Co-Lin’s Cole Moak and Hayes Thompson.

“I’m very proud of Sebastian Osorio and Juan Pablo Pinilla,” said Smith. “They revenged an early season loss in doubles and followed up with two extremely close singles matches. Cory Alderman also got a big win against an early season loss and clinched the match for us.”

The Wolves are back on the court Monday as the team travels to Raymond to take on Hinds.