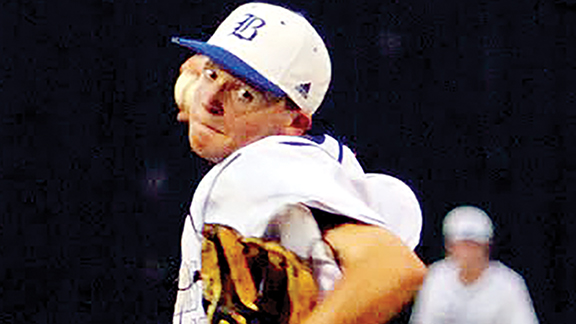 Brady Spring of Brookhaven Academy steps in to pitch in a game against Natchez Cathedral recently. (Photo by Sherylyn Evans)

NATCHEZ —  The Brookhaven Academy Baseball Cougars looked to pick up their second win of their two-game series with Natchez Cathedral Friday evening in Natchez. Picking up where they left off on Tuesday, the Cougars jumped out early and held on for the narrow 6-5 road win.

The Cougars came out fast, posting five runs in the top half of the first inning highlighted by a three-run home run from O’Neill Burgos. The Green Wave answered with three runs of their own in the bottom of the frame.

BA added a run in the second inning as did Cathedral in the bottom of the third, but the Wave could draw no closer until the bottom of the seventh. They trimmed the lead to one run only to see their hopes of a comeback win spoiled with a runner being tagged out attempting to advance to third base to end the game.

“We did some real good things at the plate tonight,” BA head coach Tyler Parvin said. “We made their pitcher throw a lot of pitches with quality at bats and hit balls hard that were in the zone.”

A stellar pitching performance by Dawson Flowers kept Cathedral in check the entire game.  Flowers gave up just four hits while striking out 11 Green Wave batters in 6.2 innings of work.  Jaden Clark picked up the save in relief.

“Dawson (Flowers) had one great game on the mound tonight, said Parvin. “He worked his way out of some jams by being mentally tough and making big pitches when he had to.”

Brookhaven Academy will be back in Natchez on Tuesday for more district action when the take on the ACCS Rebels.  JV first pitch is scheduled for 5 p.m. followed by varsity action at 7 p.m.