Funeral services for Miriam Nell Provost Smith, of Brookhaven, will be Monday, April 3, 2017, at 10 a.m. at First United Methodist Church in Brookhaven with burial in Riverwood Cemetery in Brookhaven. Dr. Tom Atkins will officiate the service. Brookhaven Funeral Home is in charge of arrangements.

Mrs. Smith grew up in the Poplarville community where she attended Pearl River Community College. She later graduated from Millsaps College with a degree in education. While at Pearl River Community College, she was a cheerleader, a member of the traveling choir, and a member of the ROTC. In the ROTC during war time, she inspected the pants and the shoes of the men in the morning line up.

She married Dr. Fred W. Smith Jr. and moved to Brookhaven in 1948. Miriam was instrumental in founding the Junior Auxiliary in Brookhaven. She taught Sunday School at First Baptist Church, and taught sixth grade in the Brookhaven Public School System for several years. She also helped with the Dixie Youth Baseball concessions and the press box. She was a member of the King’s Daughters Hospital Auxiliary, the Climbers Club and Krewe of Ceres.

Mrs. Smith was an avid bridge player and enjoyed her Wednesday afternoon bridge club. She also enjoyed playing Rummikub. She and her husband enjoyed traveling with the “Chigger Diggers” and the “Cruising Cajuns.” She and her husband also loved to dance. She was a member of First United Methodist Church. She was a loving daughter, sister, wife, mother, grandmother, great-grandmother and friend.

The family would like to extend a special thank you to Dr. Ray Montalvo, the staff of Silver Cross Nursing Home, the staff of Hospice Compassus, caregiver Mary Graham and members of First United Methodist Church of Brookhaven.

In lieu of flowers, memorials in Mrs. Smith’s name may be made to First United Methodist Church of Brookhaven or the Brookhaven Junior Auxiliary. 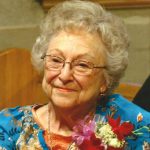