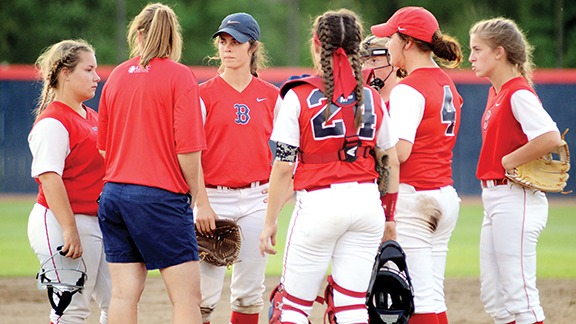 The Brookhaven Lady Panthers meet on the mound in a game recently. (Photo by Dylan Rubino)

The Brookhaven Lady Panthers continued their hot streak Tuesday night in their 4-3 win over the Enterprise Lady Jackets, making it seven wins in a row.

The Lady Panthers jumped out to a 4-0 lead in the bottom of the third inning and hung on late to seal the tough victory.

The win moves Brookhaven to a dominant 15-4 overall and the loss drops Enterprise 4-9 overall on the season.

“It’s exciting for us to get that win because Enterprise is a really good team loaded with a lot of talent,” Brookhaven head coach Mandy Vinson said. “For us to come in and hold them to 4-3 and win the ballgame, that’s good for us.”

Enterprise quickly bounced back in the top of the fourth with two RBI singles and a throwing error by Brookhaven allowed another runner to score as the Lady Jackets cut the deficit to 4-3.

Besides the two half innings, it was a pitchers duel with junior Jadeyn Fuller getting the best of Enterprise as they held on for the 4-3 victory.

Fuller pitched the complete seven innings, giving up one earned run on six hits, no walks and striking out two.

Kaylyn Chemin got the start for Enterprise and pitched 3.1 innings, giving up four earned runs on six hits, one walk and striking out two. Haley Nations came on in relief for Chemin and pitched 2.2 innings and gave up no runs.

Bussey and Wallace each had two hits and one RBI to lead the Lady Panthers. Ziskin and Allen had the other RBIs for Brookhaven.

Carly Polk led Enterprise at the plate, going 2-for-4 with one RBI for the evening. Chemin had the other RBI for the Lady Jackets.

The Lady Panthers have faced some tough competition during their seven-game winning streak and have looked like a better team during that span.

“We’ve just settled down and we’re not making as many errors as we were,” Vinson said. “Our girls are hitting the ball better and not as many errors in the field. That’s the big difference for us.”

The win Tuesday night shows the Lady Panthers can win close games as well as dominating opponents. It was a big win for Brookhaven and gives hope that they can build confidence for further down in the season.

“If we can keep peaking the way we are now and keep building, we can make a good run in the playoffs,” Vinson said.

The Loyd Star Hornets followed up their two-game sweep of Enterprise in a big way Saturday afternoon against Wesson. In... read more