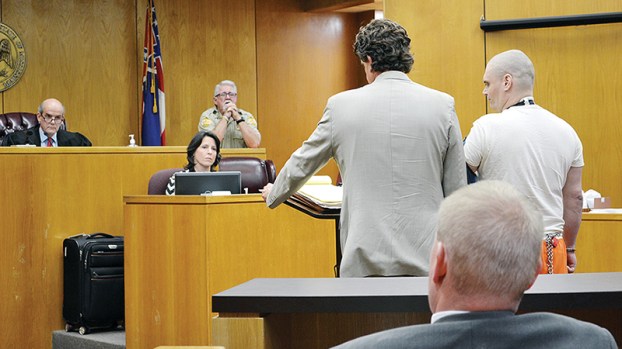 Deputy: I thought it was all over with; man gets 65 years in attempted murder

Circuit Judge Michael Taylor gave Christopher Leigh Hamilton a lesser sentence than the maximum allowed. Hamilton could have received anything short of a life sentence on each of the two counts.

When Hamilton was led into the courtroom by the jailer and a corrections officer, he was met and led to the podium by his attorney Ivan Burghard.

Taylor said more than 14 minutes of video of the gunfight at 421 River Road Drive were viewed in chambers with Burghard and District Attorney Dee Bates present, and admitted that video into evidence, along with medical records from the defense and the pre-sentencing investigation report, which included photos taken at the scene of the crime.

Deputy Ian Smith testified Monday that in the process of attempting to serve a felony warrant, the defendant became agitated. He refused to be restrained and verbally threatened the officers even to the point of saying specifically to more than one of them by name “that they would die today,” Smith said.

He said Hamilton fired on them first with a handgun then retrieved an assault rifle from his truck and shot first at Smith, who returned fire as he sought cover. “It was clear he had no regard for anyone’s safety,” Smith said. “I believe he was a danger to himself and anyone around the community at that point.”

Deputy Wade Hinshaw testified that Hamilton appeared upset when he arrived. “Chris was very agitated before I was even out of my vehicle,” Hinshaw said. He said Hamilton went into the house, so Hinshaw went to the rear of the house in case Hamilton attempted to leave that way.

When he heard shots fired, Hinshaw ran to the front and did not see Smith. He said at that point he believed Smith to have been shot and perhaps dead behind his vehicle. “I could see glass flying out of the front of the house,” he said, “and I could see Sgt. (Stewart) Thornton trying to take cover.”

Hinshaw tried to distract Hamilton by calling his name and became a target himself.  Hinshaw moved to cover and saw Hamilton retrieve a rifle from a truck and begin to shoot toward Thornton. “I opened fire a second time and Hamilton went inside the house,” he said. “We continued firing.”

Lt. Stewart Thornton, who held the rank of sergeant at the time of the shooting, testified that when the deputies arrived, Hamilton stood up and began yelling. “I asked him to calm down,” Thornton said, even after the defendant had entered the house then returned and took a weapon from his truck. “He pointed a long gun toward Deputy Smith … and began firing.” Smith ran to the rear of the house, he said. “Chris came back out and started firing at the truck I was behind,” Thornton continued, “and I though it was all over with.”

He said Hamilton returned inside the house once again, giving Thornton time to take cover behind his own vehicle. At that time, Hamilton exited the home and began firing into Thornton’s vehicle.

Following the testimonies of the three deputies involved, Bates addressed the court, stressing that this was not supposed to be the way members of law enforcement were forced to do their jobs. People who worked so hard for such little money, Bates said, should not be expected to have to put their lives on the line while serving warrants. But Hamilton caused them to have to defend themselves, he said, during what should have been routine duty.

Burghard spoke on behalf of his client, saying, “Mr. Hamilton was shot twice, and I don’t think any of the deputies or the D.A. has mentioned that today. He was shot once in his left arm by a rifle and that left arm has essentially been useless since the shooting. He was also shot once in his side, toward his back.”

“He will never have the use of that limb,” Burghard continued, adding that he would not be able to return to the type of work he’d done to this point in his life, working offshore. Burghard pointed out that the medical records show reduced kidney function, extremely high blood pressure and hearing loss.

“He has admitted wrong,” he continued, “and has insisted in all of our talks that he was fired upon first, and shot in his hip.”

Burghard said he was sorry that they were now in this situation, but wanted the court to take into account that Hamilton “nearly bled out at the scene and has suffered dearly from the effects of what happened out there.”

Taylor took another look at the paperwork before him and met with the attorneys briefly.

“This is a very serious crime, and shows a certain degree of pre-meditation,” Taylor addressed Hamilton. “Not only did you shoot at law officers, you clothed yourself in body armor in preparation. The fact that you lost the gunfight does not offer you any sympathy.”

Hamilton was escorted out, and Taylor called for a brief recess. He remained in his seat at the bench, however, and several armed officers — some in uniform and some in civilian clothes — stood in front of the officers who had testified, forming a wall as family and others who were present in support of Hamilton exited the courtroom.

Hamilton remains in the Lincoln County jail until arrangements are complete to transfer him to state prison custody.

The Loyd Star Hornets followed up their two-game sweep of Enterprise in a big way Saturday afternoon against Wesson. In... read more