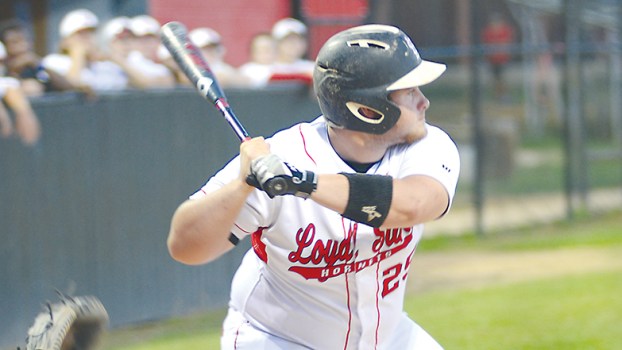 Photo submitted/Bradyn Brister of Loyd Star steps into his swing in a game played recently. Brister led the Hornets Saturday with three RBIs.

The Loyd Star Hornets followed up their two-game sweep of Enterprise in a big way Saturday afternoon against Wesson.

In an up and down contest from start to finish, Loyd Star found a way to walk it off in the bottom of the seventh with an RBI single from Bradyn Brister to take home the 6-5 victory.

The win keeps the Hornets undefeated on the season at 17-0. The loss drops the Wesson Cobras to 9-11 on the season.

“Today was another great win against a solid ball club,” Loyd Star head coach Jared Britt said. “I am proud of the guys for coming out with intensity after two mentally and physically draining games.”

Alex Mooney got the Cobras on the board in the top of the first with a two-RBI double to give Wesson the 2-0 lead. Loyd Star responded in the bottom half with two RBI singles from Konner Allen and Brister to tie the game at 2-2. Strong pitching from both sides would keep the game tied heading to the fourth inning.

After Wesson tacked on a run in the top of the fourth to take the 3-2 lead, Loyd Star responded with two runs in the bottom half to take the 4-3 lead.

Brister continued his big day in the bottom of the fifth with an RBI sac fly to increase the Loyd Star lead to 5-3.

An RBI single from Brister to center field in the bottom of the seventh sealed the victory for Loyd Star to stay perfect.

Brister led Loyd Star on the day with three RBIs, followed by Dane Smith with two RBIs on the afternoon.

Smith got the start on the mound for Loyd Star, pitching the complete seven innings and giving up three earned runs on five hits, three walks and striking out five batters.

Alex Mooney led Wesson, going 2-for-3 at the plate with two RBIs. Mooney was also the starting pitcher for the Cobras, going five innings and giving up three earned runs on seven hits, two walks and striking out five.

Bogue Chitto hosted rival Enterprise Saturday morning and the Bobcats used strong hitting to get the win over the Yellow... read more