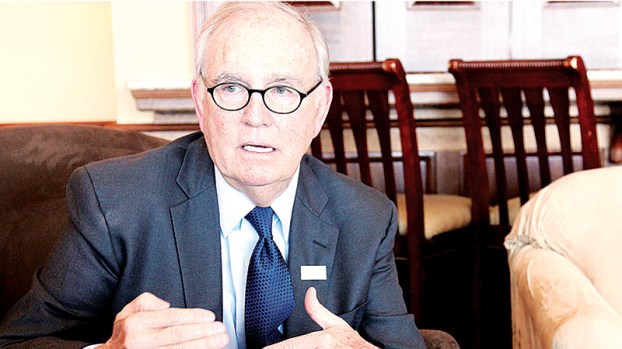 Brookhaven native Dickie Scruggs, a disbarred attorney who has worn both tuxedos and prison garb, believes firmly in second chances.

Scruggs, who’ll be 71 in May, served six years in prison on charges of attempting to bribe a federal judge after Hurricane Katrina. He explained to NBC’s Tom Brokaw he “got way too big for my britches.” It was while locked away that Scruggs was forced to slow down and contemplate life. What he learned pushed him to create a program to better the lives of others and ultimately himself.

Scruggs will be sharing the story of SecondChanceMS, a non-profit program that promotes literacy among adults, at an event Saturday hosted by the Friends of the Library and Ole Towne Church. Tickets are $10 at the Lincoln County Public Library or at the door of Ole Towne Church at 220 South Jackson St. Proceeds from the event will go to the library to fund literacy programs.

The event, which begins at 6 p.m., will be followed by a champagne reception.

On Sunday, he’ll be joined by his son, Zach Scruggs, as they talk about what needs to be done in Mississippi to help adults acquire the work skills they need to find and keep jobs. That will be in the Ministry Center at First United Methodist Church Brookhaven at 9:45 a.m.

In his heyday as a Mississippi trial lawyer, Scruggs’ battle against Big Tobacco was dramatized in the movie “The Insider.” Russell Crowe played his client in the 1999 film and Scruggs even had a small part.

The role he plays now is an educator and encourager. He found his new purpose behind steel bars, preparing inmates in the federal prison in Kentucky to successfully complete the GED program.

Before he headed to Ole Miss and law school, Scruggs went to Brookhaven Elementary School. His mother’s family, the Furlows, go way back in Brookhaven history. He still has friends here and even attended the Brookhaven High School Class of ’65 reunion last year at his former classmates’ invitation. “I’ve got long and strong ties to Brookhaven,” he said.

His family moved to Pascagoula, and after law school, he embarked on a lucrative career as a trial lawyer and made a name for himself. Then he made headlines.

In 2008, he went to prison for trying to bribe one judge and influence another in personal disputes over legal fees. He was shipped to federal prison on the first sentence, then was home on a $2 million bond while appealing the second conviction. Scruggs returned to prison in late April 2013, having lost his appeal.

He finally returned home to Oxford in March 2014. The letters filled with quotes of inspiration and encouragement, and the support of his wife Diane, helped him through those dark days.

One quote, from legendary UCLA coach John Wooden, stuck with him: “Things turn out best for the people who make the best of the way things turn out.”

Scruggs took it to heart.

“That one really struck with me,” he said. “I thought of that when I was in prison.”

Scruggs taught GED classes while in that Kentucky prison. Unknowingly, his son, Zach Scruggs, was doing the same thing while serving his own federal sentence almost 600 miles away in Arkansas. Zach Scruggs was found guilty of failing to report a felony. No evidence showed he knew about the his father’s bribe, but he did realize a lawyer working with the Scruggses visited the judge in question outside the courtroom.

Helping inmates learn became Scruggs’ focus while in prison. His purpose became “seeing the light bulb go on for these 40- and 50-year-old men,” he said. “It was giving me a second chance and a sense of purpose when I went to prison.”

Upon his release, the elder Scruggs founded and funded SecondChanceMS to help Mississippians secure GEDs and technical skills that can lead to work. The younger Scruggs was released from prison in 2009 after serving 12 months and moved with his family to Florida to work for a solar and renewable energy company.

He eventually returned home to Oxford, where he serves as executive director of the SecondChanceMS. His father is chairman of the board.

Neither are paid for their work. In fact, the Scruggs family pays for all administrative costs associated with running the non-profit.

Together and separately they criss-cross the state bringing their message to anyone who will listen — Rotarians, Lions, churches. Scruggs spoke to the Brookhaven Servitium Club two years ago about SecondChanceMS.

SecondChance and various stakeholders in the community partner to fund the program, which helps each student receive a diploma and receive workskill certification. The program pays tuition, gives them spending money in the form of a gas card and a completion bonus.

“The idea is for up to $1,000 a student, we can get someone a non-minimum wage job and a high school diploma,” he said.

The Scruggses would like to see Copiah-Lincoln Community College get on board and are looking for financial partners to make that happen.

“We would like to partner with anyone in Lincoln County to support the programs at Co-Lin now,” he said.

While tuition costs can be a barrier for someone without a high school education, transportation, childcare and food costs also become hardships for adults attempting to go to classes.

With the SecondChanceMS program, students are given $20 a week on a gas card to help with transportation costs.

Scruggs said 100 percent of the donations SecondChanceMS receives goes back into the program.

Scruggs looks forward to speaking in Brookhaven Saturday at the Olde Towne Church and again Sunday at FUMC. He hopes to encourage individuals, civic and church groups to provide more than financial support. Many times, he said, people who hear their story realize they have skills they can use to help students in their community.

When Scruggs spoke to a Rotary Club, an ophthalmologist volunteered his services to adult students at a community college nearby, treating a 35-year-old GED student to her first eye exam and a pair of glasses.

Another Rotary Club took care of an eye exam for a student, while a church donated funds to cover the cost of GED exams for two adult students.