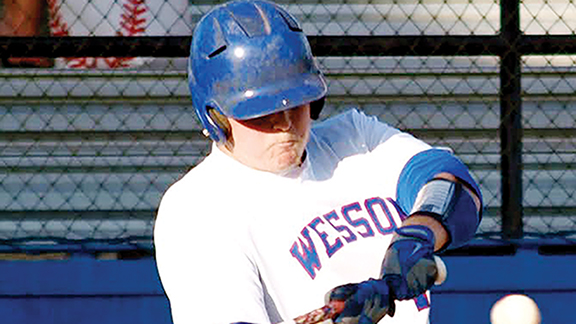 Jimmy McQuage of Wesson swings for the ball in game one of their double-header sweep of Jefferson County Tuesday evening. Wesson is now 10-11 on the season. (Photo by Tracy Fischer)

The Wesson Cobras hosted district foe Jefferson County for a double-header Tuesday night.  Wesson won both games to bring the Cobras to 8-0 in the district with two dominating wins.

“Tonight’s games were good,” Wesson head coach Seth Loftin said. “We pitched well, swung the bat good and played good defense. We will keep building on those things to continue our success.”

The Cobras took a win over the Tigers in four innings with a final score of 13-0.  Wesson pitcher Peyton Burns threw 11 strikeouts and one walk from the mound to keep the Tigers off the bases. The top hitter for Wesson was Burns with a triple and two RBIs. Preston Middleton, Alex Mooney, Slay Acy and Cade Rast hit safely with a single each. Peyton Selman stole three bases on offense.

The Cobras took the second win of the night against the Tigers with a 16-0 win.

Middleton, Wesson’s pitcher, had eight strikeouts and one walk in this quick three innings.

Burns was the big hitter for the game with a double and a single. Mooney, Acy, Jeremy Smith and Jimmy McQuage all hit a single each.

The Wesson Lady Cobras hosted the Lady Chiefs from Tylertown Tuesday night and added another win with a final score... read more