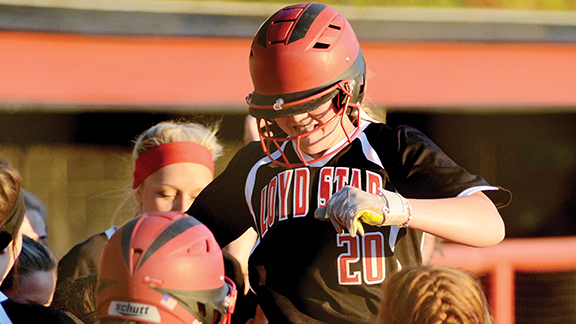 Johnna Norman of Loyd Star (20) is mobbed by her teammates jumping on home plate after hitting a solo home run in the bottom of the second in their 5-0 win over West Lincoln Thursday night. (Photo by Dylan Rubino)

The Loyd Star Lady Hornets got another win against a Lincoln County opponent Thursday night by shutting out West Lincoln by a score of 5-0.

The win keeps the Lady Hornets undefeated at 15-0 on the season and perfect in district play. The loss drops West Lincoln to 10-6 overall.

This was a big win for Loyd Star, especially with the Loyd Star tournament coming up Saturday.

“That was an important win for us because that keeps us in good shape and undefeated in district play, which is huge,” Loyd Star head coach Jan Delaughter said. “West Lincoln is well coached and a really good team. This game really helps our girls get ready for the tournament.”

West Lincoln threatened to make a comeback in the top of the fourth and fifth innings, but Smith pitched her way out of both jams and had control of the game.

“Makenzie locates her pitches really well and she’s got a lot of different pitches she can use,” Delaughter said. “She’s confident with herself on the mound. She did a great job of coming back and fighting off some hits she gave up.”

The Lady Hornets got on the board in the bottom of the second inning thanks to a solo home run by Johnna Norman to left-center field to make it 1-0 Loyd Star. Norman also hit an RBI single in the bottom of the third, when the Lady Hornets tacked on three more runs and took a 4-0 lead. Norman finished the game going 3-for-3 at the plate with two RBIs to lead Loyd Star.

“Johnna did a great job tonight and came up big for us,” Delaughter said. “She got key hits for us and so did Marley Poole.”

Poole came up with an RBI single in the bottom of the sixth to shallow center field to add an insurance run for Loyd Star at 5-0.

Pitching and timely hitting has been the motto for Loyd Star all year and it really showed up in their win over West Lincoln Thursday night.

Abigail Thornton had the other RBI on the night for Loyd Star and went 1-for-3 at the plate.

Skylar Hall led the Lady Bears at the plate going 3-for-3 on the night.

With Loyd Star hosting their own tournament on Saturday, picking up this win was a step in the right direction to perform well over the weekend. The Lady Hornets will face Wesson at 10:45 a.m. on Saturday and will end the night playing Sumrall at 6:45 p.m.

The Lady Hornets are excited for the challenge Saturday as they look to continue the great run they’re on.

“I expect a lot of competition from all of the teams,” Delaughter said. “Wesson will be a tough challenge for us. They’re a good team that’s well coached. We’ll have to play our best.”

The Loyd Star Hornets dominated once again Tuesday evening and moved to 18-0 on the season with the 16-0 win... read more