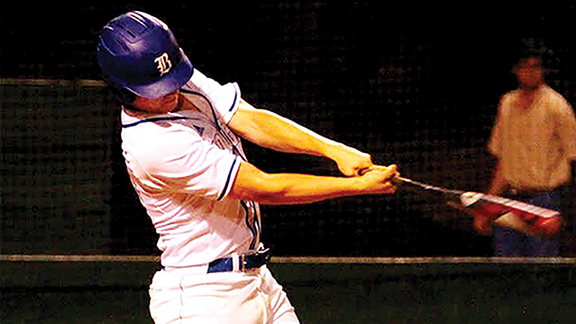 Madison Smith of Brookhaven Academy smacks a two-run homer to help lead the Cougars past Natchez Cathedral in a game earlier this season. (Photo by Sherylyn Evans)

The Brookhaven Academy Baseball Cougars looked to win their fourth straight district contest Friday night as the faced the Adams County Christian School Rebels for the second time this week.

After falling behind in the fourth inning, the Cougars answered the call posting runs late on their way to a 5-4 win.

The Cougars jumped out early, plating two runs in the bottom half of the first inning. That lead held until the fourth when the Rebels answered with four runs of their own.

With one out and one on in the bottom of the fifth inning, O’Neill Burgos launched a towering home run over the left field fence to tie the score at 4-4.  The Cougars were able to manufacture a run in the bottom of the sixth inning on a leadoff walk, a sacrifice bunt, then a sacrifice fly to deep center field by Nick Ogden to score Fisher Warren from third for the go-ahead run.

BA’s defense made some crucial plays in the top of the seventh to squander any hopes of a Rebel comeback.

Offensively, Burgos led the Cougar hitting with a home run and two RBIs on the night. Dawson Flowers had a single and two RBIs of his own. Madison Smith, Taylor Freeny and Nick Ogden each added singles to the Cougar attack.

“This was probably our best night out this season of executing plays at key times during the ballgame,” BA head coach Tyler Parvin said. “We got bunts down to move runners over, we ran the bases well and got a crucial sac fly to take the lead in the sixth.”

Dawson Flowers picked up the win for BA, pitching 6.2 innings and giving up just four hits and striking out 11 ACCS batters.

“I thought Dawson (Flowers) did a good job tonight battling every batter,” Parvin said. “He stepped up in a must win game for us.”

Jaden Clark picked up the save getting the last out to end the game. Marshall Edmonds suffered the loss in a short relief effort for ACCS.

Brookhaven Academy will return to action Monday as they travel to Marion County to take on the Columbia Academy Cougars. BA will face Columbia again on Tuesday back home at Harold Williams Ballpark. JV first pitch is scheduled for 5 p.m. followed by varsity action at 7 p.m.