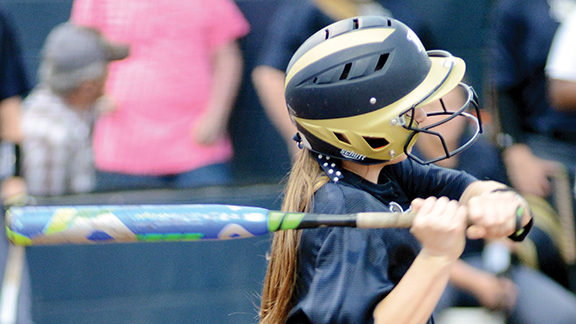 Baileigh Jackson of Bogue Chitto gets ready to swing in a game played recently. The sophomore went 2-for-4 with two RBIs in their 11-1 win over Ole Brook Thursday. (Photo by Dylan Rubino)

After retiring the Lady Panthers in the top of the first, the Lady Cats quickly jumped in front by scoring four runs in the bottom of the first. Freshman Codi Leggett scored the first two runs of the game on a two-RBI double to make it 2-0 Bogue Chitto. The Lady Cats scored again on a throwing error that got past third base to increase the lead to 3-0. Eighth grader Julianna Frazier hit a sacrifice fly for the fourth run of the inning before the Lady Panthers could record the final out.

Leggett got the start on the mound and pitched a great game, going six innings and gave up no earned runs (one run) on two hits, no walks and struck out six batters. The Lady Cats added on another run in the bottom of the fourth inning with an RBI triple from senior Cherie Savoie to increase the Lady Cats lead to 5-0.

The Lady Panthers tacked on their only run of the game in the top of the sixth from a throwing error to first base, which scored senior Tia Bussey to make it 5-1.

With one out in the bottom of the sixth, the Lady Cats loaded the bases and started to pour it on. Sophomore Karly Leake forced a walk with the bases loaded to bring in a run. Senior Terrah Nelson also walked and brought in another run. Leggett followed with another two-run RBI double into right field to make it 9-1. Sophomore Baileigh Jackson hit an RBI single followed by Juliana Frazier grounding into a fielder’s choice to score the final two runs of the game.

“The girls did a good job and hit the ball well,” Bogue Chitto head coach Scott Leggett said. “Codi (Leggett) pitched a great game and had good defense behind her. It was a good win.”

“Bogue Chitto came ready to play and they are a good team. We weren’t mentally focused,” Ole Brook head coach Mandy Vinson said. “We’ve got to do better making routine plays and be patient in the box. Look forward to a good practice tomorrow and to bounce back Saturday.”

Leggett picked up the win for the Lady Cats on the mound. Madison Thompson took the loss for the Lady Panthers, pitching 5.2 innings.

After a tough win against St. Andrews Episcopal by a score of 2-0 Thursday night on the road, the Loyd... read more