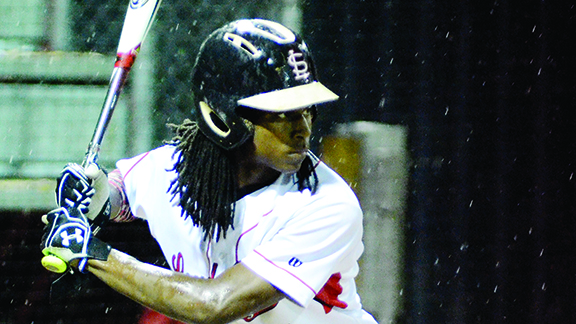 Sophomore James beard of Loyd Star (4) steps in the batters box in a game recently. Beard went 3-for-3 in game one of their doubleheader victory over Amite County. (Photo by Dylan Rubino)

After a tough win against St. Andrews Episcopal by a score of 2-0 Thursday night on the road, the Loyd Star Hornets bounced back and swept district opponent Amite County Friday night.

With the sweep and their 5-4 win over Brookhaven Saturday afternoon, Loyd Star continues their incredible run and stays perfect at 22-0 and moves to 12-0 in district play.

“It’s good to pick up two more wins district wins,” Loyd Star head coach Jared Britt said. “We hit and pitched well. Now we need to get back to work and prepare for the rest of the season.”

Sophomore Dylan Case got the start for Loyd Star and pitched well, going all three innings and gave up two runs on no hits, one walk and five strikeouts.

Dustin Hayes-Robinson got the start for Amite County and pitched one inning, giving up 17 runs (five earned) on nine hits, two walks and two strikeouts. Junior Zailen Allen pitched the other inning in relief.

The second game of the doubleheader was more of the same as Loyd Star crushed Amite County by a score of 15-0 to stay perfect in the district.

The Hornets continued their onslaught at the plate with three runs in the first, five in the second and seven in the third to complete the sweep.

Dane Smith also had a big day at the plate with a home run and a double. Senior Konner Allen followed up with a double and a single. Six other players for the Hornets recorded a hit.