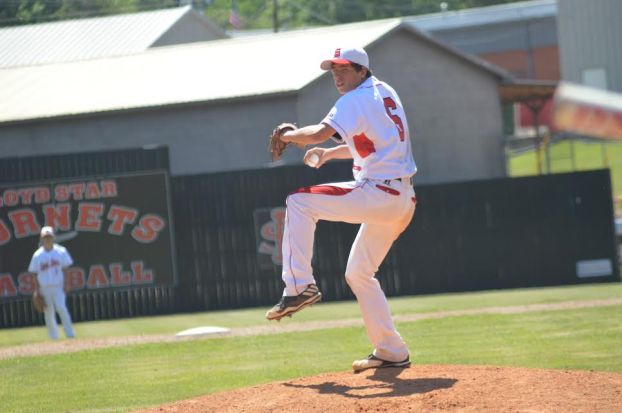 Cutline: Cade Hodges of Loyd Star winds up to pitch in their 5-4 win over Brookhaven Saturday afternoon. (Photo by Lydia King)

It was a battle of dominant baseball teams Saturday afternoon at Loyd Star, with the Hornets taking the walk-off win over Brookhaven 5-4.

Loyd Star came into the matchup undefeated on the season at 21-0, and Brookhaven came in riding a 17-game winning streak.

“Today was a pitchers’ duel between two great pitchers. Hats off to Brookhaven. They battled and put us on our heels,” Loyd Star head coach Jared Britt said. “We were able to make the plays needed and got the key hits to pick up another win. That was a good, playoff-type atmosphere for both teams.”

The Hornets jumped on the board with a run in the first inning and tacked on three more in the bottom of the third to give them the 4-0 lead.

The Panthers scratched and clawed the entire game and it paid off. Ole Brook tacked on a run in the top of the fifth and three more in the sixth to tie the game at four.

With the teams tied at four after seven innings, the game would go to extras. Britt made the decision to pitch sophomore Dane Smith in relief of Hodges in the top of the eighth and Smith shut the door on Brookhaven.

Loyd Star responded in the bottom of the eighth and walked it off with the 5-4 win to keep their perfect season alive.

Hodges had a big day at the plate for the Hornets, going 1-for-4 with a team-high two RBIs. Sophomore James Beard led Loyd Star with three hits on the afternoon, including a home run, a double and a single. Junior Tucker Watts went 2-for-4 at the plate with one RBI and senior Bradyn Brister had one RBI as well.