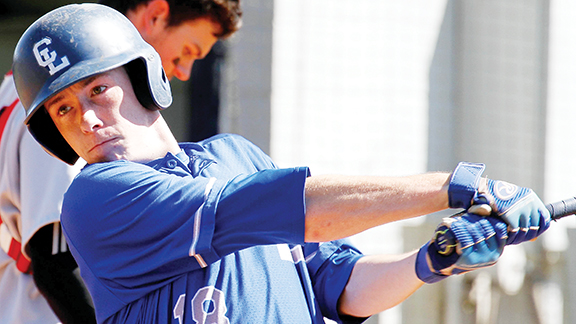 Austin O'Flynn of Co-Lin (18) warms up in the batter's box in their game one win against Northeast recently. (Photo submitted)

BOONEVILLE — The Wolves were unable to complete the sweep Saturday as the Tigers of Northeast snuck out of game two with a walk off single to win 7-6.

The contest was back-and-fourth in game one as the Wolves tallied 11 hits while Northeast collected 10. In the sixth inning the game was tied at six apiece when Co-Lin took advantage of a wild pitch and scored two runs to take the lead for good.

Conner Wilkinson scored in the first inning for Co-Lin after an error to give the Wolves an early lead. The Tigers plated two in the bottom of the first on singles.

Co-Lin tied the game in the second when Chandler Dillard scored on a wild pitch.

A three-run homer from Northeast in the bottom half of the second gave the Tigers a 5-2 advantage.

The Wolves clawed back in the third with two doubles from Jaylyn Williams and Austin O’Flynn. The hard hit balls plated one each for Co-Lin and cut the lead to 5-4. Northeast stretched their lead to 6-4 in the fourth after a wild pitch.

J.T. Wright tied the game at six all in the fifth with a single to center field that scored Williams and Kody Smith. Williams added one more in the sixth and a wild pitch scored another to give the Wolves an 8-6 advantage.

Tyler McLeod drove in the Wolves’ final run in the top of the seventh with a single to left that scored Wright.

Christian Day earned the win for Co-Lin. He threw five innings, surrendering six runs, seven hits, and striking out six. Zach James recorded the last 12 outs to earn the save for the Wolves.

The Tigers lit up the scoreboard first with a run in the first, but the Wolves responded in the second when Smith scored on an error to tie the game at one apiece. Another error in the fourth plated Williams and gave Co-Lin a 2-1 lead.

Matthew Mordecai blasted a two-run homer in the fifth for Co-Lin to stretch the lead to 4-1 with just two to play.

Northeast rallied in the fifth and scored five runs in the fifth after an error, a double, and a single. Williams regained the momentum for the Wolves in the top of the sixth with a solo homer to left to cut the Tigers lead to just one, 6-5.

Wright drove in Hayden White in the top of the seventh to tie the game at six all and forced extra innings.

In the bottom of the eighth, Northeast’s John David Poss singled for a walk off victory.

Poss and Walker led Northeast at the dish with two hits each. Poss, Garrison Howell, and A.J. Roaten led the Tigers with two RBIs each.