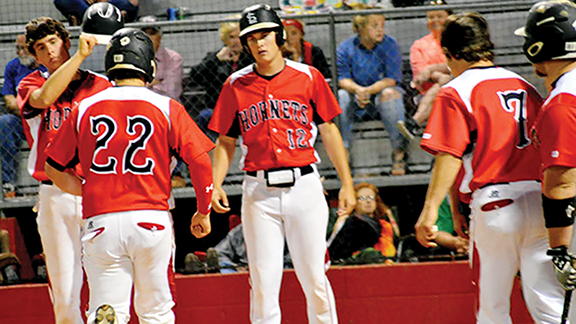 Junior Tucker Watts of Loyd Star (22) is greeted at home plate by teammates Konner Allen (12) and Cade Hodges after Watts hit one of his two home runs in their 12-6 win against West Lincoln Monday night. Watts finished the game 3-for-4 at the plate with two home runs, a double and seven RBIs on the night. (Photo by Lydia King)

The Loyd Star Hornets put their perfect record on the line when they trailed West Lincoln 6-0 after the top of the third.

Loyd Star showed resiliency and toughness by scoring 12 runs over the next three innings and moved to 23-0 with their 12-6 victory Monday night. The loss drops West Lincoln to 18-4 overall and 10-3 in district play.

The win clinches the 2A Region 7 district championship for the Hornets, a goal that needed to be accomplished for the team. The goals are starting to get loftier now with a perfect season in reach.

“We showed a lot of mental toughness to fight back after falling behind big early,” Loyd Star head coach Jared Britt said. “The district championship was one of our goals at the beginning of the season.”

With four games left in the regular season and a doubleheader coming against West Lincoln Thursday evening, a perfect season is in reach.

The standout player of the game was junior catcher Tucker Watts, who led the Hornets at the plate going 3-for-4 with two home runs, a double and seven RBIs on the night.

Watts helped lead an offensive attack in the bottom of the fourth inning, where the Hornets took the lead for good with seven runs to make it 9-6.

“The guys hit well and settled in defensively around the third inning,” Britt said.

Senior Konner Allen got the start for Loyd Star on the mound and pitched three innings, giving up six runs (two earned) on four hits, two walks and struck out three.

Freshman Tanner Watts came on in relief for Allen and pitched great for the Hornets by throwing four innings and gave up no runs on no hits, three walks and struck out six batters.

Senior Seth Bivens got the start for the Bears and took the loss with five walks and four strikeouts.

Watts was a big part of the offense for Loyd Star, but the rest of the bats came through also with 10 hits. Allen followed up going 1-for-4 from the plate with two RBIs on the evening. Senior Bradyn Brister and sophomore Dane Smith each had one RBI to lead the scoring attack for Loyd Star.

Junior Kylar Fielder and senior Austin Burris each had a double for West Lincoln. Bivens and sophomore Gabe Nations each had a single for the Bears as well.

It was a battle of dominant baseball teams Saturday afternoon at Loyd Star, with the Hornets taking the walk-off win... read more