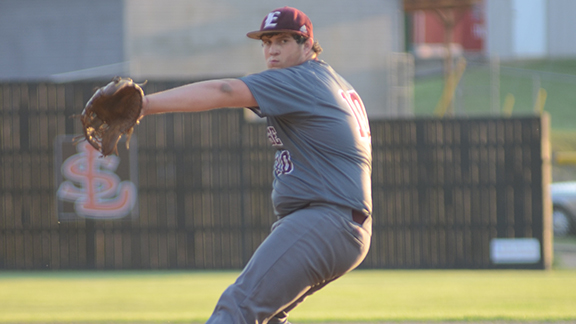 Freshman Colby Beard of Enterprise (10) winds up to pitch in a game recently. (Photo by Dylan Rubino)

The Enterprise Yellow Jackets made the road trip to take on the Prentiss Bulldogs Tuesday night and handled business by putting up 17 runs in their dominating 17-2 win.

The win moves the Yellow Jackets to 14-9 overall and 9-4 in district play with three games left in the regular season.

“I thought we played well,” Enterprise head coach Cass Brister said. “It was a district win that we needed to get on the right track. We need to take two more tomorrow heading into the last week of the season.”

Enterprise and Prentiss will meet again tonight in a doubleheader at Enterprise.

It was a strong performance at the plate for Enterprise as the team totaled 17 runs on nine hits for the game with five players recording a hit and nine players scoring at least one run.

Freshman Colby Beard got the win on the mound for Enterprise, pitching four innings and giving up two runs (none earned) on one hit, one walk and five strikeouts.

Senior Marvin Butler led the Jackets with three RBIs by going 1-for-2 at the plate on the night. Beard also had a big day at the plate going 2-for-4 with two RBIs. Sophomore Landon Gartman also went 2-for-4 with two RBIs as well for Enterprise. Senior Cade Cangemi, senior Jeffery Daniels, junior Cade Feltus, junior Tanner Waldrop and sophomore Hunter Richardson each had one RBI on the night.

With the regular season winding down, it is important for Brister and his Yellow Jackets to pick up as many wins as possible before the postseason starts.

“I am hoping this will help get us hot at the right time,” Brister said about the doubleheader tonight.