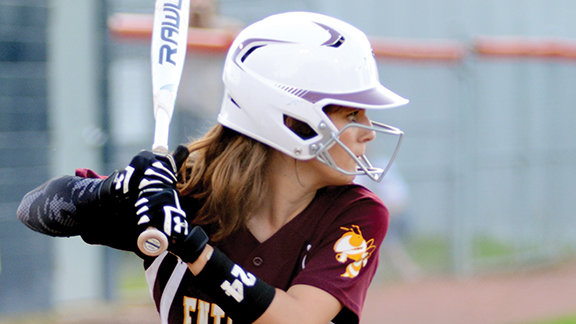 Jana Nations of Enterprise (24) steps into the batters box in a game played recently. Enterprise will face Loyd Star for the district title tonight at Loyd Star. (Photo by Dylan Rubino)

The Lady Jackets jumped out in front of the Lady Bears in the top of the first inning on a throwing error to first base, which scored Carly Polk from first base to make it 1-0 Enterprise. Lauren Gartman followed with an RBI single to increase the lead to 2-0.

Abby Richardson hit an RBI sacrifice fly to right field in the top of the second to increase the lead to 3-0.

The Lady Bears scored their only run of the night in the bottom of the second with an RBI single from Bailey Wilson, which brought in Skylar Hall from third to make it 4-1. Haley Nations hit an RBI groundout in the top of the third, bringing in Gartman to increase the Enterprise lead to 5-1.

Gartman brought in more runs in the top of the fourth with a two-RBI single with the bases loaded to make it 7-1. Kaylie Burgess soon followed with an RBI single to increase the lead to 8-1.

The Lady Jackets added an insurance run in the top of the seventh to seal the district victory 9-1.

Haley Nations pitched all seven innings, striking out 11 batters and giving up one run to earn the win for the Lady Jackets. Adi Paden took the loss for the Lady Bears.

“Haley Nations pitched a great game and I’m proud of the girls,” Enterprise head coach Charissa Burke said. “They hit the ball well. We won against a great West Lincoln team. Now we have to get ready to take on Loyd Star for the district.”

“We didn’t play good early and gave up too many runs and had to constantly fight back,” West Lincoln head coach Andrew Redd said. “We can’t do that against a good team like Enterprise.”

The Lady Bears will be in action Tuesday as they host Wesson in the final home game of the season with first pitch at 6 p.m. The Lady Jackets will head to Loyd Star tonight with first pitch set for 6:15 p.m.