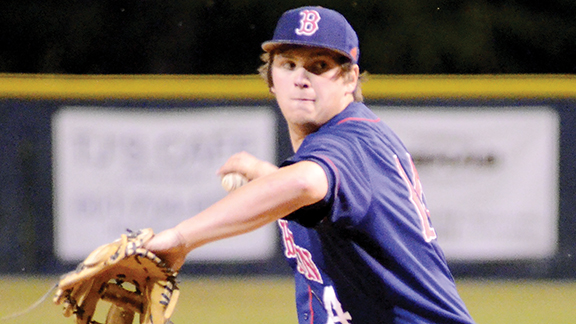 Senior Tate Walley of Brookhaven (14) steps into his pitch Tuesday night in their 14-0 win over Bogue Chitto. Walley pitched three innings and gave up no runs on no hits, one walk and seven strikeouts. (Photo by Dylan Rubino)

The win moves the Panthers to 18-7 overall on the season and the loss drops the Bogue Chitto Bobcats to 11-10 on the season.

In the previous meeting between the two teams on March 7, Brookhaven won easily by a score of 11-0 and Tuesday was more of the same.

It was a complete performance from Ole Brook Tuesday with the offense totaling 13 hits and the pitching shutting down a good Bogue Chitto offense.

The leader at the plate for the Panthers was sophomore Jacob Porter, who went 2-for-3 with four RBIs, including a two-run homer in the top of the third inning to extend their lead to 12-0. Freshman Gatson Walker had his moment as he hit an RBI triple later in the inning to give Brookhaven the 13-0 lead.

Sophomore Coker Wright had a good game at the plate going 2-for-3 with two RBIs and two runs scored. Sophomore Corbin Falvey and junior Clint Stephens each had one RBI to round out the scoring leaders. Eight players had at least one hit, leading the offensive charge for Ole Brook.

Senior Tate Walley picked up the win on the mound for the Panthers and took control of the game, going three innings and giving up no runs on no hits, one walk and striking out seven. With the win, Walley extended his record to 4-2 as a starter and owns an impressive 1.83 ERA for the season.

Senior Dalton Fortado came on in relief for the Panthers and pitched the final inning, giving up no runs on no hits, one walk and two strikeouts.

The Panthers will have one more district game in the regular season before the postseason starts when they take on Natchez on the road tonight. Ole Brook stands at a perfect 5-0 in district play. First pitch is set for 7 p.m.

The Bobcats will have to bounce back quickly as they’ll face undefeated Loyd Star at home Friday afternoon. First pitch is set for 12 p.m.