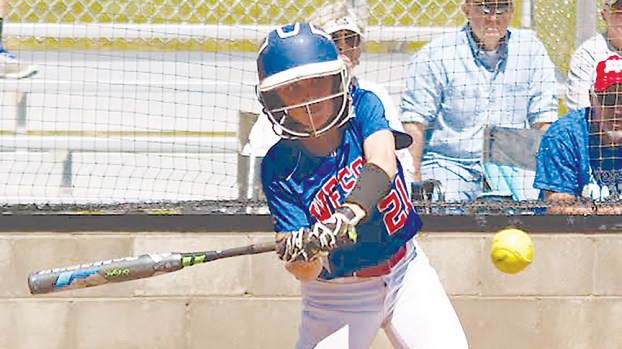 Photo by Louise Fischer/Shelbi Maxwell of Wesson swings for the ball in a game earlier this season.

“I’m proud of the girls,” Wesson head coach Michelle Nunnery said. “They have worked hard all season for the district championship and will continue to put their best effort forward in the playoffs.”

The first inning started off slow with neither team scoring. The Lady Bulldogs got some hits in the top of the second inning, but a spectacular catch by Wesson shortstop Shelbi Maxwell left two runners on base and the Lady Cobras got out of the inning unharmed.

The Lady Cobras carried that momentum and got five hits, resulting in four runs in the bottom of the second. Katie McSweyn hit a single that brought in two runners and Anna Clair Crow hit a triple to add one more run to the score.

Franklin County came back in the third inning and put three runs on the scoreboard with hits by Chasney Green and Malaine Moak, but Wesson’s Amber Brinson helped turn a double play from the mound to hold the tying runner at third.

The game ended with Wesson second baseman Arie Douglas stopping a grounder and throwing the runner out at first to clinch the win and the district championship for Wesson.

Brinson pitched the first four innings and gave up four runs, one walk and struck out two batters. Laynee Crapps finished the game in relief with three strikeouts. The top hitter for Wesson was Shelbi Maxwell with four hits, including a double and three singles. Crapps followed with a triple, a double and two RBIs on the night. Anna Claire Crow had a triple, a single and one RBI. Brooke Jones had two RBIs.

For the Lady Bulldogs, pitcher Emilee Wallace threw three strikeouts and one walk for the game.  Wallace and Chasney Green hit two singles each and players hitting safely were Chloe Clanton, Sydney Scott, Cheyenne Higgs, and Brandi O’Neal with a single each.