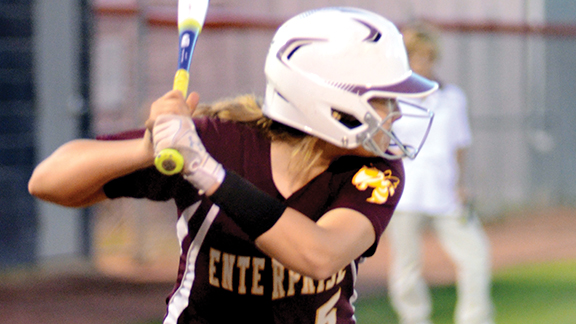 Lauren Gartman of Enterprise (5) steps to the plate in a game played recently. Gartman led the Lady Jackets going 2-for-3 at the plate with two RBIs on the night. (Photo by Dylan Rubino)

In a winner-take-all game for the district championship, the Enterprise Lady Jackets came to play and upset the previously undefeated Loyd Star Lady Hornets 2-0 for the District 7-2A title.

The win moves Enterprise to 8-10 overall and the loss drops Loyd Star to 17-1.

Both pitchers settled down into a pitching dual until the top of the fourth, where the Lady Jackets struck again. Gartman once again brought in a run on a hard hit RBI double.

Behind the defense, Haley Nations kept Loyd Star off balance, not allowing a single run to score. Nations finished the game pitching all seven innings and gave up no runs on five hits, one walk and nine strikeouts. The Lady Hornets did have some success as they managed to get some runners on base. Relying on her pitch location and defense, Nations dominated on the mound and got key strikeouts, pop ups and ground outs to keep her shutout going.

The Lady Hornets threatened to tie the game in the bottom of the seventh, with runners on second and third, but Nations got Makenzie Smith to pop up to center field for the final out, winning the district championship by a final score of 2-0.

“We always knew we were only going to be what we wanted to be. Tonight, the girls wanted to be winners and we were determined to give it all they had against a very good Loyd Star team and they came out on top,” Enterprise head coach Charissa Burke said. “We wish Bogue Chitto, Loyd Star and West Lincoln the best of luck in the playoffs and hope we all make the Lincoln County School District proud.”

“We knew this was going to be a tough game with both teams starting their best pitchers,” Loyd Star head coach Jan Delaughter said. “We just didn’t hit the ball well tonight. Enterprise is a great team and we wish them good luck in the playoffs.”

Smith did everything she could on the mound to keep her team in the game and she pitched another great game. Smith threw seven innings and gave up two runs (one earned) on four hits, three walks and struck out eight.

Gartman led the way for Enterprise on the night, going 2-for-3 at the plate with two RBIs to lead the Lady Jacket charge. Jana Nations and Kayln Chemin had one hit each to round out the offensive attack.

The Enterprise Yellow Jackets made the road trip to take on the Prentiss Bulldogs Tuesday night and handled business by... read more